Pros: Excellent use of all that The Rose has to offer, including the lake and surrounding areas.

Cons: The use of physical theatre, including the use of dance, could be off putting for some.

Our Verdict: A good production overall, though fans of Shakespeare may not care for this modern take on one of his most famous plays. 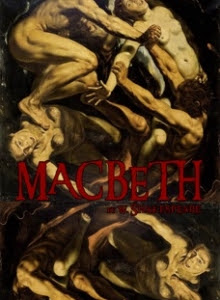 The Rose Theatre, Bankside, is an old Elizabethan theatre and is certainly the oldest theatre on Bankside, predating even The Globe. It therefore seems a fitting setting to take in a Shakespearian play.  WOH Productions have created a modern day take on Shakespeare’s classic, Macbeth – turning the character of Macbeth himself into a financial executive, intent on taking over ‘Crown Holdings’, headed by Lord Duncan. The integrity and history of Macbeth is still prevalent, but this physical adaptation, which incorporates both dance and music, makes it an innovative and creative production.

Set in London, Macbeth, played by Clive Moore, is portrayed as a banker working alongside his friend Banquo.  He comes across the three weird sisters, the witches, who offer up predictions that he will become Thane of Cawdor and King.  When Banquo asks for his own fortunes, the witches proclaim him the father of a line of kings. Following this encounter, Macbeth’s greed and desire for power win over and he kills Lord Duncan, in order to take over his position as the Head of ‘Crown Holdings’. He later realises that Banquo’s fortune told of a line of kings and he decides to kill his friend and his son in order to prevent this fortune from coming true. Both he and Lady Macbeth descend into a world of madness, guilt and ambition leading to their eventual downfall.

Moore’s often soft-spoken characterization of Macbeth would be out of place in a larger venue. However, in the intimate setting of The Rose, this actually adds to the intensity of the performance. Members of the audience are sat within a few feet of the action, with the exception of the scenes taking place beyond the lake hidden at the back of The Rose. Francesca De Sica is a fantastic representation of Lady Macbeth in all her sensuality and madness. The scene where she is found sleepwalking while attempting to scrub the blood from her hands was intense, emotional and one of the best scenes in the production. While De Sica also doubles as Banquo, her strongest moments come from her portrayal of Lady Macbeth.

The other cast members make up various other parts of the performance including the witches, a physical representation of darkness, Macduff and the porter. A score of characters are left out of the production, with the focus mainly on the nine characters mentioned thus far. Some were discussed in passing, but often only through phone calls or text messages that the characters made. Headlines via The Standard newspaper are used to announce the progression of events such as Duncan’s murder, the slaughter of Macduff’s family and the death of Macbeth and his wife at the plays conclusion. The BBC News theme is also used to highlight key moments and offers a realistic view on how these events might be portrayed in today’s media. Lighting is used well with red lights illuminating the lake, surrounding area and stage to represent the bloodshed that has taken place and the downward spiral into madness and betrayal that Macbeth and Lady Macbeth find themselves on.

It is very much a stripped down version of the original, running for only 80 minutes, while its more traditional counterpart, just a stones throw away at Shakespeare’s Globe, has a running time of 2 hours and 30 minutes. Fans of Shakespeare may not be able to adjust to this modern day version, but for those willing to take a chance and try something different, this production is by no means poor.