Cons: Only that both plays are heartbreakingly sad!

Our Verdict: A perfect pairing of two plays exploring the themes of memory, grief and loss. Painful and wonderful to watch.

Double bills often don’t make for a coherent and satisfying evening of theatre. Not so with Freefall. The two 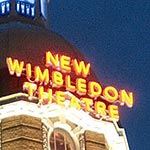 plays featured, The Bear, the Owl and the Angel by Becky Pretwich and Lacuna by Matthew Bulgo, gel beautifully. Both are fascinating explorations of memory, grief and loss, and both are incredibly moving to watch.

First up was Becky Pretwich’s The Bear, the Owl and the Angel. Two estranged brothers have come together for the first time in twenty years, following the death of their mother. Steven (Kieran Knowles) left home (Yorkshire, I think) many years ago and has become a successful restaurateur. Significantly, his restaurants specialize in replicating a taste of home; as we’ll discover, there’s a part of Steven longing for what he left behind. Younger brother Robbie (Robin Morrisey) was always the brainy one, expected to go far, but instead stayed where he grew up and is now employed as a carer. Together, they are sorting through their mother’s bedroom. The experience of discovering forgotten personal possessions, every object unleashing a painful torrent of memories, is familiar to everyone. As the play explores, memory is a slippery thing. Robbie and Steven have different recollections of their shared childhood.

Throughout their conversation, the brothers are tiptoeing around the family tragedy that led to their estrangement, a tragedy that reverberates twenty years after it happened. Prestwich’s script is skilful in the way it teases us with titbits of information, slowly revealing the secrets of the past. As the brothers, Knowles and Morrissey are wonderful together. It is exquisite to watch their frosty relationship thaw and then freeze again.

The second play, Lacuna by Matthew Bulgo, begins with an eerie stillness. We are in a hospital where David, a kindly and earnest doctor is interviewing Kate. We wonder: why is she here and why has she been asleep so long? Gradually, we learn that Kate’s mother has recently died and that the trauma of her grief has led to memory loss. Amnesia is a familiar plot device from many a soap opera, but never portrayed so heartbreakingly as it is here. As in The Bear, the script is enigmatic and tantalizing. Slowly, layers are peeled away to reveal the lacuna in Kate’s memory.

Again, the actors’ partnership is superb. As an audience, we sat rapt as David extracted the harrowing memories from Kate’s mind. Joanne Ferguson is marvellous as the broken Kate. Alastair Kirton, in the role of the interviewer, has less to say, but boy can he listen. He delivered a remarkably understated and touching performance.

So excellent direction by Alice Malin. Both plays are also aided by Adrian Gee’s understated set designs, which perfectly portray both the mother’s bedroom and the chilly hospital.

I cannot remember the last time I felt so moved at the theatre. This double bill tugged at my heartstrings and made me want to hold my loved ones.

Previous: Festen, The Space
Next: Macbeth, The Rose Theatre