Pros: A spectacle in the best sense.

Cons: Sometimes not quite funny enough.

Our verdict: Possibly the best performance of these farces ever given.

The program promises a hilarious evening of Victorian one-act farces. What we get instead are moments of hilarity and moments of merriment. The show begins with a performance of Box and Cox, written in 1847 by John Maddison Morton. This is followed by Wanted, A Young Lady then A Most Unwarrantable Intrusion and Duel in the Dark.

Farces are notoriously hard to pull off, and especially the four presented this evening, all written in Victorian England. Everything rests on the precision of timing to ensure the show gets the laughs in the right places and that not a single piece of information is lost on the audience. There were flashes of brilliance on display and then there were times when the action dipped. And this is a shame. This is clearly a labour of love for everyone involved and the audience seemed to really enjoy the trip back to Victorian England. Ultimately however the first three plays were not as hilarious as the final one. This is nothing to do with those involved but more to do with the playwright’s script. It was difficult to connect with and they sometimes dragged on.

The set, designed by Tomasin Cuthbert, consisted of numerous room separator screens for the actors to make their entrances and exits and provide the occasional sound effect. This was perfectly complimented by the faded Victorian grandeur of the Wilton’s Music Hall. The costumes were suitably Victorian and provided great visuals. The actors are well cast. All three cast members paraded with endless conviction through numerous roles in numerous guises and pointed every line to a boisterous audience. All shone in particular moments. Richard Latham as Snozzle in A Most Unwarrantable Intrusion, John O’Connor in Box and Cox and particularly Asta Parry as Maria Jane Greenfinch, a well bred young English lady in disguise as a faceless Parisian woman, in Duel in the Dark.

The Director, Jonathan Kemp succeeds in selecting the best people for various jobs in the European Arts Company. The set designer, costume design team, the lighting designer, assistant director and stage manager are clearly a tight knit company and I really look forward to their next venture.
I entered the spectacular music hall ready to laugh out loud this evening but I really couldn’t. And I have to stress again that it is nothing to do with the work of the company, but more to do with the farces themselves. What once was funny and silly is now a bit tired and dated. But I guess that’s the point. And the whole performance is glorious to look at. Just like a beautiful painting.
Please feel free to leave your thoughts and opinions in the comments section below! 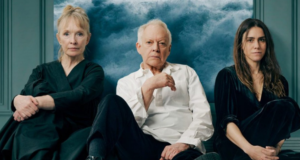