The Anorak, Lion and Unicorn Theatre

Cons: The staging was perhaps a little too bleak.

Our Verdict: An accomplished and intelligent piece of writing performed with flair and intense emotion.

Speeches are the old-fashioned status updates: most people tolerate them, others even encourage them, but more often than not they end up self-indulgent and utterly tedious. And like status updates, they should always be short and sweet. Which is why, whenever I see the word ‘monologue’ at the top of a theatre programme, I experience the same sense of foreboding you get when an actress thanks her hair-extension grower, or when a best man recites every joke he’s ever heard that contains a rude word. There’s really nothing worse than hearing someone bang on for hours about rubbish.

And so, here I was at the cosy-yet-stylish Lion and Unicorn pub in Kentish Town for tonight’s show, The Anorak. It tells the true story of a young man who went on a killing spree at a Canadian polytechnic. Interesting, I thought, but it’s a one man show. Hmmmm….

But, as I keep forgetting, monologues aren’t speeches. If done well, they are deeply personal stories designed to lure you into the mind of the intriguing and engaging central figure. But that’s the risk: if there’s a flaw and the plot’s not good or the actor isn’t right, then you can be stuck without any chance of things picking up. There really isn’t anywhere to hide.

Luckily, this production had no such flaws. Little touches gave the piece an extraordinarily unique feel, none more so than the decision to segregate the audience into male and female sections (for reasons revealed later on in the play).

The actor, Felix Brunger, masterfully pulled off the feat of sustaining a French-Canadian-speaking-broken-English accent for the play’s hour-and-a-half duration. What’s more, the novel way he presented his story to the audience further enhanced the play’s extremely controversial content.

The stark set – pretty much all black – was cleverly transformed throughout the show, as the maniacal protagonist scribbled down in chalk certain important diagrams, numbers or phrases that cropped up. This drew the piece away from simply one man’s life-story, and instead gave the impression that we were witnessing an eerie and haphazard university lecture – somewhat appropriate given the setting of the massacre.

My one slight criticism is that this crazy genius chalk-scrawling was too understated: the set was pretty stark, and this was an efficient and much-needed way of bringing it to life. I was expecting a Jack-from-the-Shining-style descent into madness, with the black non-descript set turning ominously into a chalky, dusty nightmare. But that didn’t happen. So, as a result, I felt it lacked a significant gear change or crescendo needed to instil some extra drama into the account. At the climax, the character did show some deeper emotion and he did become more animated, but it could have done with a bit more visual excitement.

Yet this really is only a slight criticism of an otherwise excellently-written and thought-provoking piece. As mentioned, there was intense emotion throughout, highlighted by the actor producing real tears rather than just screwing up his face (I realise actors are meant to be able to produce real tears, but I still find it impressive). In fact, the play was so moving to some members of the audience that they too produced real tears. 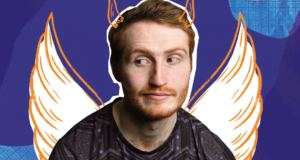 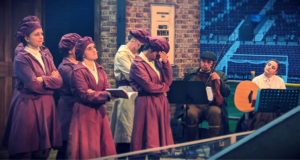 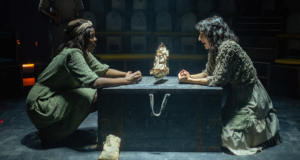