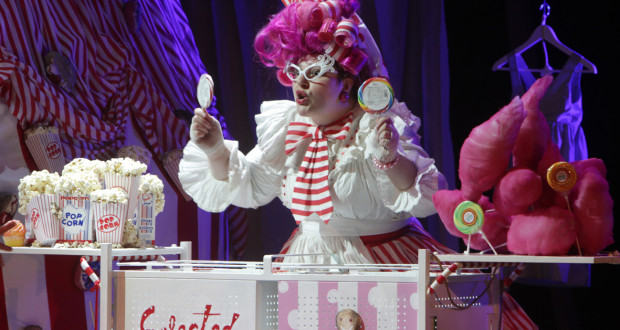 Pros: A clever and lighthearted English translation performed with a good deal of humour and excellent characterisation.

Cons: The orchestra did overpower the singers at times, making it a struggle to hear key lines.
Hansel & Gretel, John McIntosh Theatre

Pros: A clever and lighthearted English translation performed with a good deal of humour and excellent characterisation. Cons: The orchestra did overpower the singers at times, making it a struggle to hear key lines. I think the first thing to do in this review is to echo the programme’s quick dismissal of the composer of Hansel &amp; Gretel being one in the same as Eurovision’s Engelbert Humperdinck. Now that we’ve gotten over the total disbelief that this name could be issued to an infant twice, we can focus on the production at hand. We all know of the Grimm&hellip;

An accessible opera and endearing piece of entertainment by talented performers, but it lacks a wow effect.

I think the first thing to do in this review is to echo the programme’s quick dismissal of the composer of Hansel & Gretel being one in the same as Eurovision’s Engelbert Humperdinck. Now that we’ve gotten over the total disbelief that this name could be issued to an infant twice, we can focus on the production at hand.

We all know of the Grimm Brothers’ fairy tale Hansel & Gretel, but those of us less (or completely un-) familiar with the opera world will be unaware that it was written into an opera in the late 19th century. Certainly less terrifying than how I remember the story as a child, the opera version stemmed from a homespun, family friendly adaptation, based on the Brothers Grimm plot but created by the composer’s sister. Dragged into contributing music to the little family production, Humperdinck recognised such promise in the final product that he turned it into an opera.

As mentioned in our podcast interview with Co-Opera Co.’s Artistic Director Kate Flowers, it is our guestimation that opera may stave off certain people with an air of stuffiness, elitism and an inability (or fear) to understand it; the one thing I do know about opera is that they’re often sung in a different language for example. However, I found this production of Hansel & Gretel to be extremely accessible, mostly because it was sung in English, but also because of the ‘by the family for the family’ quality it retained from its roots.

This ambiance was created by the intimate and comparatively modest production space (for an opera that is; think of the magnitude of the Vienna State Opera for example!) of the 300-odd-seat auditorium of the John McIntosh Theatre, as well as by a simple, slightly home-crafted looking, but effective set from designer Carl Davies. Originally strewn with full-up clothes lines (surroundings which also act as the forest in which the siblings find themselves lost), Act 3 impressively reveals the infamous candy-covered gingerbread cottage of the wicked witch. This was a glorious and massive cupcake shaped, goodie adorned tent, out of the top of which a Dame Edna-like witch popped out to warn the children against devouring her sugary home.

In this context I don’t want the word accessible to be taken as a metaphor for amateur however; the talent and the skills of the performers were both obvious and impressive, with the exception of perhaps a slightly more musical than opera voice in the singer of the father, Stephen John Svanholm. However, as he certainly sings better than I ever could, I will refrain from commenting too much on this! While opera evidently relies quite heavily on the voice, the somewhat exaggerated (probably rightly so for this medium) but animated characterisations were a welcome relief from the stiff, stand on the spot hand-gesture acting I was perhaps expecting (for what reason, I’m not entirely sure). Llio Evans was particularly charming as Gretel and won the audience over with her bewitched-by-the-witch walk, a thriller-esque gate that collapsed the audience into giggles every time.

Opera of course couldn’t get very far without a strong score carried by a capable orchestra, which was certainly present in this production, despite having got off to a slightly shaky start in the opening and occasionally drowning out the singers.

All in all, this was an enjoyable night out and I would recommend it to those intrigued by the opera that would like an introduction.