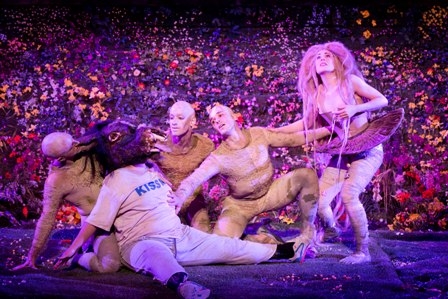 Pros: some brilliant scenes which generate a real sense of darkness and enchantment.

Pros: some brilliant scenes which generate a real sense of darkness and enchantment. Cons: a reasonable amount of directorial and creative indulgence which generates unnecessary, out-of-place and vulgar scenes. Yesterday, for the third time since February, I found myself taking my seat to watch yet another version of Shakespeare’s A Midsummer Night’s Dream. We’ve seen the Filter Dream and the Korean Dream; this time it was the Open Air Dream. Despite them technically being the same play, each production has been unrecognisably different. It is an easy play to experiment with, and the previous two productions we’ve seen have&hellip;

Although it shows real promise, it lets itself down. It's worth seeing because it is different, but be prepared to feel disappointed in places.

Yesterday, for the third time since February, I found myself taking my seat to watch yet another version of Shakespeare’s A Midsummer Night’s Dream. We’ve seen the Filter Dream and the Korean Dream; this time it was the Open Air Dream. Despite them technically being the same play, each production has been unrecognisably different. It is an easy play to experiment with, and the previous two productions we’ve seen have really hit the mark. Sadly however, this most recent version at Regent’s Park Open Air Theatre was a lot less dreamy that the previous two.

Director Matthew Dunster has left the language pretty much intact, but the story is told in ‘big fat gypsy’ style. The action is set in part travellers’ encampment and part building site, complete with cranes, warning tape and piles of bricks. Caravans, miniskirts, and a giant marshmallow wedding dress complete the look and move the action forward to mimic the TV series. Without question it is a bold and unique interpretation. In advance I had been told to expect to see a production that brings out the darker side of Shakespeare’s text. Whilst this was certainly true in places, I feel that some are confusing darker with vulgar!

It’s not all bad news. Of the three productions I’ve seen this year, this one creates the most ‘magical’ atmosphere. The wonderful outdoor setting of the venue helps, with the wind rustling through the trees and the smoke and haze being swirled around naturally within the amphitheatre. The diminishing light and the rather clever sound track from Nick Lidster and Ian Dickinson adds to this, and in certain areas I really did see the darker side of the text. The menace that is Puck (played on a BMX bike by Oliver Johnstone) was on fine and very evil form, and some of the scenes involving Titania (portrayed eerily by Tamsin Carroll) were brilliantly twisted in places. The ensemble that surrounded her was impressive as well, performing some excellent movement scenes.

The Athenians were less convincing overall, although Hayley Gallivan’s Hermia and Rebecca Oldfield’s Helena were wonderfully amusing and extremely well played. As always, the most laughs came from The Players, and George Bukhari’s portrayal of Bottom was marvellous and extremely funny. Sadly however, despite a raft of what were excellent performances, the production was marred by a lot of directorial indulgence and some rather vulgar, tacky and unnecessary scenes.

At two hours forty-five minutes this is a long version of the play. However, at least twenty minutes are wasted on things like The Players’ choreographed street dance, complete with vile disco lights and LMFAO blasting out over the sound system. Totally unnecessary, not particularly funny, out place (even despite the move into big fat gypsy world!) and, when you’ve already been watching for two and a half hours, just annoying. Another moment that I found bizarre was the reasonably explicit sex scene between Bottom and Titania – nobody minds explicit scenes, but this felt vulgar and rather out of place. I’m not sure if it was supposed to shock me or make me laugh. Suffice it to say, it achieved nothing except to make me look at my watch and sigh.

I understand that the whole notion of telling it as a ‘big fat gypsy tale’ brings with it the vulgarity and the tacky-ness which I didn’t think worked. Perhaps it’s because the language is anything but, but maybe it’s because in places it isn’t tacky and vulgar, but instead magical and extremely engaging. But despite it creating some of the most enchanting theatre I’ve seen this year, this production also includes some moments which brought it down badly. It’s a real shame, because alongside the tacky bits that detract from the piece, there are some tremendous performances and some good ideas. Is it worth seeing? Probably, but be prepared to feel a little bit disappointed that a production with so much potential lets itself down a bit.