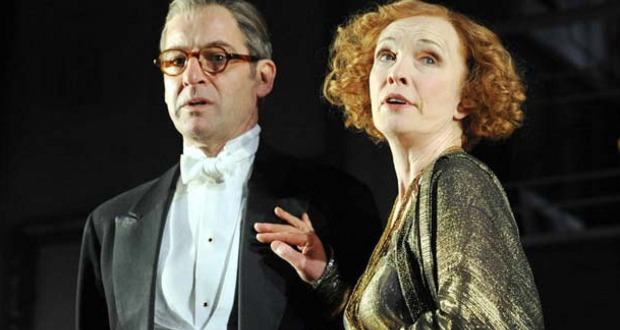 Pros: A very well executed production with some famous faces.

Pros: A very well executed production with some famous faces. Cons: Sometimes the lack of distinct plot makes it difficult for the audience to stay engaged. There has been a considerable hubbub surrounding the latest production to be staged at the Noël Coward Theatre. Not least because six years after it changed it's name from the Albery Theatre, the Noël Coward theatre is finally hosting a production of one of Noël Coward's plays. Better late than never, I suppose. The play in question, Hay Fever, is not as obvious a choice as Blithe Spirit or Private Lives would have&hellip;

An enjoyable and entertaining evening which delivers its fair share of laughs.

User Rating: Be the first one !
There has been a considerable hubbub surrounding the latest production to be staged at the Noël Coward Theatre. Not least because six years after it changed it’s name from the Albery Theatre, the Noël Coward theatre is finally hosting a production of one of Noël Coward’s plays. Better late than never, I suppose. The play in question, Hay Fever, is not as obvious a choice as Blithe Spirit or Private Lives would have been. None the less, it has considerable notoriety in theatrical circle, and Howard Davies’ latest production boasts an excellent cast. How does it fare in its latest incarnation? Towards the end of his career, Coward commented on his first production of Hay Fever: ” [the reviews] were amiable and well-disposed although far from effusive. It was noted, as indeed it has been today, that the play had no plot and that there were few if any ‘witty’ lines”. Coward’s own words describe this production to a tee.

As Coward recognised himself, Hay Fever is a play which doesn’t have any particular plot line. Some would argue, that this is of no importance: this play is more a farce based high society’s manners and protocols (or lack thereof) than a comedy driven by a strong story line. None the less, as an audience member it is sometimes difficult to stay engaged. The trick is to think of this as a comedy of situation, and to enjoy the cringes, the awkwardness and the uproar caused by the Bliss family’s total disregard for the expected social protocol. The basic setting is that each member of the dysfunctional but well-off Bliss family invites an acquaintance to their country home for the same weekend. Without, of course, consulting each other. The result is a crowd of characters, often polar opposites, forced to socially interact and follow protocol. A retired diva, a dull diplomat, spoilt children, an arrogant novelist, a clueless flapper… the list goes on, and the audience are witnesses to perhaps one of the most awkward weekends in modern literary history.

What of this production then? The show itself is framed in a beautiful box set designed by Bunny Christie. Filled with pretentious art and ageing furniture, the setting for this country farce could hardly be better represented. In addition, this production is stunningly lit by Mark Henderson, capturing the subtle tones of the English country weather through the windowpanes. Visually, this is a faultless rendition of Coward’s play, both visually appealing and pragmatically optimised for comedic effect.

In terms of performance, again, it is hard to find any serious flaws in this production. Indeed, as mentioned above, the audience are treated to a marvelous cast with some famous faces. Lindsay Duncan gives a very funny rendition of retired theatrical drama queen Judith Bliss, who sees the entire social situation as an excuse for a performance, especially if this is at the expense of her guests’ comfort. Another strong performance comes from Kevin McNally, playing a role totally different from the swashbuckling Gibbs from the Pirates of the Caribbean franchise. In this role, he plays David Bliss, the uproarious writer whose total disdain in the face of social protocol prompts many a laugh. Olivia Colman (well-known for her role in Peep Show) and Freddie Fox also gave good performances, but for me the most enjoyable caricature came from Phoebe Waller-Bridge (who some might remember from supporting roles in How Not To Live Your Life or more recently The Iron Lady). Her portrayal of spoilt teenager Sorrel Bliss hit the perfect balance between snobbery, eccentricity and sheer lunacy. Her performance was an absolute pleasure to watch.

To sum up, Howard Davies has delivered us an amusing and entertaining rendition of a difficult farce. Without any particular weak-points, I found myself wondering why I did not enjoy this production more. On paper, I should have done, but as Coward himself suggested, the script itself was not intrinsically as funny as, say Design for Living. This being said, it was an enjoyable and often funny production which was masterfully staged, and hats off to the cast and creative team for their efforts.

Written by: Noël Coward
Directed by: Howard Davies
Booking Until: Now running with a new cast at the Duke Of York’s Theatre until 1 August 2015.
Booking Link: http://www.showsinlondon.co.uk/show/hay-fever

Previous: Don Juan Comes Back from the War, Finborough Theatre
Next: The London Spring, Etcetera Theatre