You can use WP menu builder to build menus
Home » Reviews » 13, National Theatre 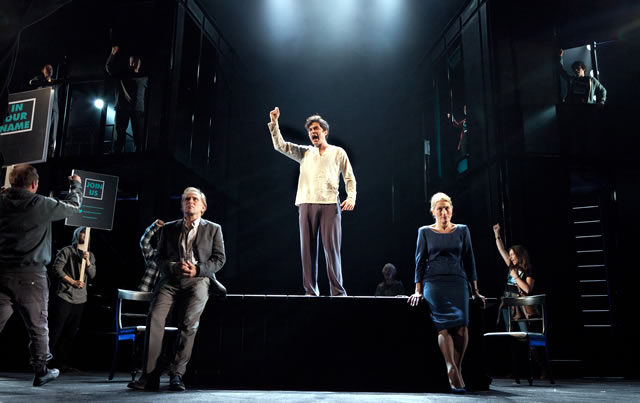 I was persuaded, just in the nick of time, to give Mike Bartlett another go after I, like many others, left Earthquakes in London feeling disappointed. However, I was determined to go into it with an open-mind and this was helped by the fact that I was walking into the Olivier, which brings with it all the anticipation of encountering a mind-blowing set.
Productions staged in this theatre have each given different answers to the question of what to do with the daunting vertical space and designer Tom Scutt and his team came up with a great answer for 13; a giant, rotating and altogether awesome black cube.
The opening sequence of the play shows this cube off in all its glory, rotating impressively to reveal the characters within it. It’s the kind of opening that instantly reminds an audience that they are in the National Theatre and therefore are in good hands, at least where staging is concerned. Within the first hour, the cube’s full potential is unleashed in a feat of mechanics that makes you nudge the person sitting next to you in excitement (best if you already know said person) as it splits open into two pieces and later, disappears entirely into the depths of the Olivier stage.
The set during the second half is decidedly less exciting, as cube is split and partly dismantled during the interval. Sadly, the play follows a similar pattern. The first half is everything the second is not; more movement, more cube, more colour from the characters and less preachy in tone. There’s an energy with which we are introduced to the different characters, all of them suffering from the same nightmare in their sleep and Thea Sharrock’s skillful direction keeps the interlinking narratives moving at an engaging pace. By the end of the first half, when the messianic John, is lifted into the air standing on top of the cube to rally people to his cause even I was excited for what was to come next. Unfortunately what came next was a rather disappointing and unfulfilling second half.
A couple of obvious flaws lie in the realism of it all; the play’s assumption that the Prime Minister alone makes the decision of whether to go to war or not and the apparent ease with which the she is able to dedicate a considerably long amount of time to what is quite frankly a vague and unintelligent debate with the ‘opposition’. The real problem is that the second half takes too long and doesn’t move much further past what we already know of the characters involved. If this was supposed to be the climax of the play, the moment when the two sides have it out, it passed me by almost completely. John has his chance to be heard and to stop the country going to war and yet I didn’t feel strongly enough for him and I certainly didn’t believe for a moment that he could do it.
There were some unexpected highlights, my favourite, and most unexpected, being the Grandmother’s slow rendition on the piano of Rihanna’s Only Girl in the World. In fact the Grandmother’s character is a wonderful addition to the collage of stories we are presented with and I think her justification for vandalizing her bank resonated the most strongly out of all the narratives with many of the audience members. In fact, if you came away from this play thinking only of the disappointing lead characters, then I think you’ve missed a lot. For me, the more intriguing stories were the smaller ones; a lawyer realising the depth of his unhappiness, a mother’s judgement obscured by her beliefs, misleading her into murdering her ‘evil’ daughter. Away from the unreachable 10 Downing Street and the high rhetoric of Dr Stephen’s academic ranting, I found in these characters something more human and at the same time more haunting. Similarly, the soldier’s monologue at the play’s close saved me from walking out of the theatre completely hating the ending as I did with Earthquakes in London. It gave me what I want from theatre, a human story – a man who pulled a trigger on a complete stranger and is still asking why.
The play’s run at the National has ended, saving me from having to say I’d recommend it, and sitting in on the closing night I had thought there might have been a few more standing ovations in the audience. All in all though, I’m glad I gave Bartlett another try and thinking about it on the way home, I hope I always will give his plays a go. It might not produce amazing theatre every time, but his content is current; he is writing for us. We may not like to see ourselves represented on stage, whatever side we identify most with, but surely that’s all the more reason to do it and however mixed the results may be, Mike Bartlett is doing it.

Please feel free to leave your thoughts in the comments section below!
13 has now completed its run at the National Theatre. This review was published after the final performance.