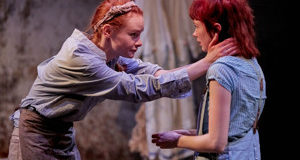 A confident debut production with some hard-hitting moments – I just wish the difficult questions posed by the play had been wrestled with in more depth.

END_OF_DOCUMENT_TOKEN_TO_BE_REPLACED 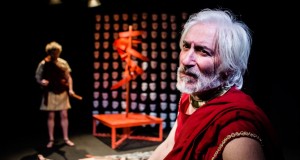 Despite the disparity between the two pieces, overall a thought-provoking production with enough intelligent humour to make a heavy subject digestible.

END_OF_DOCUMENT_TOKEN_TO_BE_REPLACED

SophoclesAdapted by Timberlake WertenbacherDirected by David Mercatali★★★ Pros: Thought provoking and deeply meaningful script, raising questions of life and death whilst making a mockery of modern warfare. Star-filled cast makes it feel less Fringe and more West End. Cons: The dialogues don’t quite manage to glue together and some characters seem to appear just out of the blue. A handful of funny anachronisms. Our Verdict: A blood-soaked adaptation of a Greek classic with a stellar cast. Despite some plot gaps, ...

END_OF_DOCUMENT_TOKEN_TO_BE_REPLACED

Aeschylus, translated by Paul Elmer More Directed by Cieranne Kennedy Bell  ★★★ Pros: An ancient and powerful story that is rarely performed, with strong actors and an unusual and intriguing method of storytelling. Cons: At times difficult to follow, and many aspects of the performance are overcompensation for the lack of action.  Our Verdict: Emotionally charged and engaging. This brutal tale will appeal more to those with an interest in Greek mythology, but still has a powerful connection with a ...

END_OF_DOCUMENT_TOKEN_TO_BE_REPLACED

Sophocles Directed by Ricky Dukes ★★★★ Pros: A brilliant example of how Greek Tragedy can be made relevant to the modern day, and accessible to all audiences. Cons: One or two moments of slightly “shouty” acting where more emotion could perhaps have come through. Our Verdict: This production of the famed Sophocles masterpiece is fast-paced and gritty for its entirety, ingeniously proving that the intimidating genre of Greek Tragedy is both applicable to the current day and hugely enjoyable. Courtesy ...

END_OF_DOCUMENT_TOKEN_TO_BE_REPLACED

Caroline Bird, After EuripidesDirected by Christopher Haydon★★★★★ Pros: An excellent and original reworking of the Greek text with stellar performances and an exceptional design. Cons: Sight-lines are a little tricky, but blockages can be avoided by arriving early to claim front seats. Our Verdict: An all-around wonderful production featuring a spectacular script, cast, design, and message. Courtesy of the Gate Theatre Several years ago I worked in the sound-booth for my university’s production of The Trojan Women, so while I ...

END_OF_DOCUMENT_TOKEN_TO_BE_REPLACED

Euripides, in a new version by Mike BartlettDirected by Mike Bartlett★★★★ Pros: Bartlett seldom puts a foot wrong, and his adaptation of Medea is no exception. Cons: Perhaps overly and unnecessarily keen to keep some of the aspects of the classic tragedy format intact. Our Verdict: A brilliant introduction to a timeless classic, with an incredibly strong central performance from Rachael Stirling. Courtesy of Manuel Harlan for The Guardian Mike Bartlett has, to be honest, had a pretty awesome few ...

END_OF_DOCUMENT_TOKEN_TO_BE_REPLACED

Sophocles, in a new version by Don TaylorDirected by Polly Findlay★★★★ Pros: great performances, short, snappy staging. Cons: Greek tragedies aren’t everyone’s cup of tea – they are by definition depressing! Our Verdict: an engaging and worthwhile rendition of a Greek classic. Courtesy of the Daily Telegraph Re-imagining ancient Greek tragedies is always a difficult task. It seems that, because these plays have been around for literally thousands of years, any conceivable adaptation has already been done. It can therefore ...

END_OF_DOCUMENT_TOKEN_TO_BE_REPLACED

Aeschylus, translated by Ted HughesDirected by Anastasia Revi★★★ Pros: An engaging production of a Greek classic with some great imagery and stylisation. Will keep you entertained. Cons: Sometimes goes over the top and veers towards melodrama. Our Verdict: Worth the trip if your want to catch an entertaining version of a rarely-performed classic. Courtesy of Anna Soderblom A two and a half hour long production recounting the ins and outs of a three-generation-long family feud was never going to be ...