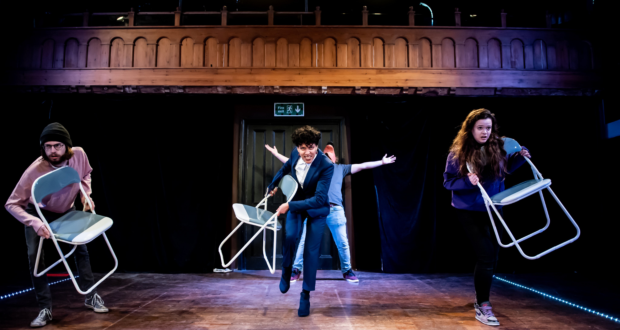 Most of the theatre I've watched this past year has been pre-recorded, often from the actor’s homes, but The Space have been brave enough to live stream shows direct from their venue. It’s great to see a live show in a real theatre space, to get a feel of the atmosphere of the venue. Plus the novelty of being able to see a show at The Space without the epic journey home across London hasn’t worn off either. In Try Harder we meet three young people all starting a new job together. It's not clear what the job is,&hellip;

At times Try Harder highlights what it is like to be a young person trying to find their way through life with such clarity it’s startling. But most of the time it is just incredibly bizarre.

Most of the theatre I’ve watched this past year has been pre-recorded, often from the actor’s homes, but The Space have been brave enough to live stream shows direct from their venue. It’s great to see a live show in a real theatre space, to get a feel of the atmosphere of the venue. Plus the novelty of being able to see a show at The Space without the epic journey home across London hasn’t worn off either.

In Try Harder we meet three young people all starting a new job together. It’s not clear what the job is, in fact none of the new recruits have even seen a job description. I imagined it might become obvious as the show progressed. That proved not to be the case! The show is described as a “surreal comedy drama” exploring the pressures on young people today, and surreal is undoubtably the most accurate description.

The plot is somewhat difficult to understand. Grace (Helen Squires), Lucy (Tânia Miranda de Carvalho) and Sam (Toby Moran-Mylett) arrive at their new job and are soon told by Joe (Darrel Draper) to start moving their chairs from one side of the room to the other. This is the main narrative of the show, and there is perhaps too much time focused on how they should be moving the chairs. It’s unclear what this is a metaphor for. This obscure nature of the show hits a peak when they start manically moving chairs around to Basement Jaxx’s Where’s your head at, with Joe in a horse’s head mask dancing at the back. At this point I did start to wonder if someone had slipped something into my dinner.

The chair moving scenes are interspersed with even more moments of randomness. I thought these would focus on the back story of each character, as the first is used to explain Lucy’s story and how she came to this strange job. This is a great section of the show as it explores the overwhelming feelings she is experiencing; it is incredibly effective. So it seems like a missed opportunity not to then explore all the characters in the same way.

One section that does work particularly well is a parody advertisement for going to university, with the false promises many young people are led to believe. This rang true with the messages fed to me in sixth form, that there really wasn’t an alternative to university. At many points in the show, the humour takes a dark turn, touching on the current pandemic with the statement: “a global virus that means you’re trapped there forever“, which would have seemed preposterous a year ago.

Although the cast are strong, with no noticeable slip ups despite the live stream, the show proves difficult to stay fully focused on. Without a clear narrative to follow it becomes a challenge. More could, should, have been done with the chair metaphor to stop it from becoming monotonous.

Try Harder does explore some interesting ideas, highlighting the triviality or needless complexity of many of the institutions that we engage with throughout our lives. It also touches on bigger topics but then fails to explore them in any depth; climate change is thrown in at one stage but then never referred to again. At times I was utterly bemused, yet occasionally it struck a chord. But perhaps this is the point – I am yet another young(ish) person, confused by what life is throwing at them.

Written and Directed by: Yusuf Niazi
Produced by: Jake Curran-Pipe for Pursued by a Dragon

Try Harder is available to livestream 7.30pm until 8 April. Standard tickets are £10. Full booking details can be found on the website below.