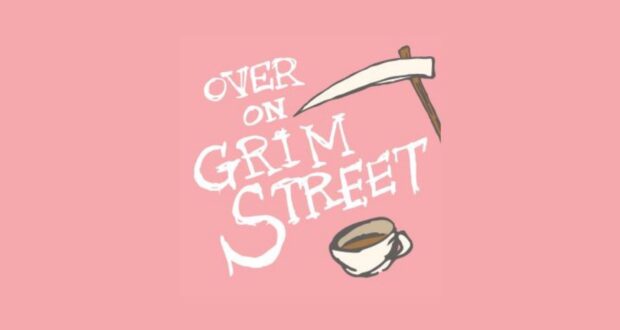 At what point do we watch online content and judge it as we would film and TV? When do we stop saying “well, it’s made for the stage, not the small screen”? and so forgive its poor technical aspects? I ask because, if I were judging Over on Grim Street purely as an online view, it’d be easy to pull it apart for endless technical matters. So maybe it is best to get the moaning out of the way first before we consider it as a piece of theatre. The biggest issue is in the actual filming. Accepted, this&hellip;

This play is somewhat marred by poor production values, but overlook that and you are left with a rather fun and interesting take on what happens when the Grim Reaper meets a lonely granny.

At what point do we watch online content and judge it as we would film and TV? When do we stop saying “well, it’s made for the stage, not the small screen”? and so forgive its poor technical aspects? I ask because, if I were judging Over on Grim Street purely as an online view, it’d be easy to pull it apart for endless technical matters. So maybe it is best to get the moaning out of the way first before we consider it as a piece of theatre.

The biggest issue is in the actual filming. Accepted, this was clearly made in lockdown, so there are some difficulties*. But it’s hard to overlook that Grim Reaper (played in wonderfully morbid style by Filippo Del Bo) and Tabitha (by the charming Kit Clark) are meant to be having a chat over the kitchen table, yet feel too disjointed. It’s way too obvious they are not really there together. As the camera switches from one to the other repeatedly, the sound and feel of the scene is different for each. Surely it could have been better filmed and edited to avoid this? It’s jarring enough to have me wondering if I’m able to tolerate this for its near 50-minute run time.

What else? The reduced portrait screen to signify video calls she has with friends: why? Just use split screen – it would look so much better. The pouring of imaginary tea from a pot: why not just have actual tea instead of making it look like a kiddies’ tea party? It’s these little gripes that can cost, especially when there are so many alternative shows available as part of this online season from TheSpaceUK.

So, after all that, why watch at all? Well, what you find beneath the issues is a fun and well thought out play about what would happen should the Grim Reaper spend the day discussing life (and death) with Tabitha, a typical old granny. Whilst Grim (as Tabitha takes to calling him) talks existential crisis, Tabitha is more concerned with the day-to-day and how much she misses her long since departed husband. Oh, and she is also a little worried that Grim is here to take her, especially as he has just admitted to murdering one hundred people, something he assures her he doesn’t normally do.

Lucy-Jo Finnighan’s writing delivers up some wonderful juxtapositions and word play between the pair: “I am bigger than anything you can comprehend” Grim informs Tabitha at one point, to which she replies “You are? How are you fitting in my kitchen then?” This is just a wonderful play on how each views the world around them. And then there is the way that Grim, the bringer of death, somehow instead brings a new life into Tabitha, she returning the favour by making this most unwelcome of visitors feel welcome. There is gentle humour and charm enough to just make those earlier niggles fade away a little.

It is difficult to overlook the issues in how Over on Grim Street has been filmed; that nagging thought that surely there were better ways to do this.  However, if you can bring yourself to work past those, then it really is a fun piece of theatre that is greater than the sum of its (distracting) parts.

* This is an amended version of the original review, as there was an error in suggesting this was filmed in 2019 before lockdown, whereas in fact it was filmed in 2020 during lockdown.

Written and directed by: Lucy-Jo Finnighan
Produced by: Abel Kent (with York DramaSoc)

Over on Grim Street is playing as part of Online@TheSpaceUK Season 2, and will be available free until 31 January. This show, plus many others, can be found on the website below.