Author: Everything Theatre in Features and Interviews 18 November 2020 0 57 Views

When not reviewing for Everything Theatre, Nick Myles is a writer and all-round theatre addict. As our reviewers all give their time for free, we’re always more than happy to try to give a little back to say thanks. So when he told us about his latest project, it seemed the ideal time to ask Nick to tell us about how creating a show for online has differed from usual.

My name is Nick, and I am a theatre-holic. I get my fix any way I can: as an audience member, a writer, a director, a script-reader and a reviewer. Sometimes I’m at a show four or five times a week, and often I fill the spare days with stand-up comedy or the cinema. To say that drama and entertainment have taken over my life would be an understatement.

Of course all that was in the Old Days. Since late February when booked shows started dropping out of my diary like pheasants from the sky at a madman’s shooting party, the arts landscape looks very different. With only television, radio and box sets to feed my habit, the future seemed bleak. As well as all the shows I had expected to see, I had planned three theatre projects of my own for the summer months, all of which have been relegated to the back burner, and may not come to the boil until sometime next year, if ever.

But the creative urge is not easily thwarted. I’ve continued working on stage plays even if their future is distant and uncertain. I’ve switched one short play set in an office conference room (boring!) to a Zoom meeting, which adds a load of comedy potential as angry people are unable to punch each other in person, and “How’s your lockdown?” replaces the weather as the small-talk of choice.

But one project which was actually conceived after the national drawbridge was raised against infection marked a genuine change in direction for me as a writer.

I hadn’t written prose for a long time until I decided to write a Christmas ghost story for We Are Cult – one of the sites I occasionally review for – in 2018. I enjoyed the process, so with no theatres to write for, I thought “I’ll do something in prose about lockdown, and that’ll keep the creative juices flowing…” 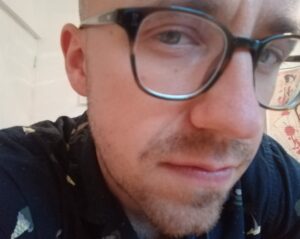 That something became The Man in the Window, the story of Marcus, a single gay man who on the first “Clap Our Carers” night notices a neighbour across the road to whom he takes an immediate shine. Despite an almost complete lack of reciprocal interest, Marcus’s imagination begins to build a relationship between the two men…

As I plotted Marcus’s journey and explored his character – exactly as I would if writing a stage play – I began to realise that the most fitting medium for this piece would actually be a film. Marcus had developed a distinctly egotistical voice, the sound of which I could imagine him enjoying, and it occurred to me that a video diary/vlog format would work really well.

I’ve written and directed a dozen or so stage monologues, and my instinct told me that The Man in the Window had the potential to re-create the intensity of that person-to-person relationship between actor and audience. I started to re-write the piece, stripping out the more prosaic passages, and began to think about casting.

I had worked with actor Raphael von Blumenthal a couple of years ago when I cast him in my play Did He Leave a Note? at Stockwell Playhouse (RIP). I knew that this part was well within Raphael’s range, and crucially that he would be a great collaborator as we mined Marcus’s peculiar personality together.

And so a strange rehearsal process began. It was so different but also utterly familiar, in that it was me with a pad and pen watching an actor do their stuff and then giving them notes. The fact that we were on Zoom instead of in the same room was unconventional but actually irrelevant in the end. And the experience of watching Raphael bring this compellingly odd character to life was just as fascinating as any theatre project I’ve taken part in. Throughout, Raphael was superbly intuitive but also receptive to direction, which is the perfect collaborative combination.

Every production hits bumps along the way. We had one run-through during which it became clear that the direction we’d taken in Part 2 jarred against the scenes around it: my efforts to energise this section worked in isolation, but viewed alongside the rest of the film it sounded a discordant note. I panicked a bit, grasping for a solution, while of course concealing the extent of my concerns – directors do not reveal such insecurities to their actors…

I thought we had a mountain to climb, but after a few hesitant notes from me about dialling down the scorn and raising the curiosity, Raphael in the very next take solved the issue completely.

Encountering – and hopefully fixing – these issues as they arise in the rehearsal room is par for the course in theatre. But whereas in the Old Times I would probably have paced about a bit and thrown some possible solutions around, that’s not really an option on Zoom. Probably the main difference with video rehearsing is that its restrictions make the process more focussed.

Whilst addicts like me will inevitably hanker for the return of the intoxicating plethora of theatre we used to have at our greedy disposal, the old status quo seems an impossible dream right now. Some big buildings are re-opening with drastically reduced audiences, which is of course a Good Thing. But what of the Fringe, where dramatists such as myself and thousands of others were used to plying our trade while we hope for that break into the mainstream? It’s difficult to imagine pub theatres and other fringe venues with small, compact seating and intimate stages being able to revive themselves in the near future.

Until that far-off day, film projects and video-rehearsing are part of the theatre community’s New Normal. And I’m happy to say that the experience of creating The Man in the Window and bringing the production to fruition with Raphael has been one of the most rewarding of my career to date.

The Man in the Window (a lockdown love story), written and directed by Nick Myles, performed by Raphael von Blumenthal, is available to watch for free in three easily digestible chunks.

Tagged with: Did he leave a note interview Nick Myles Raphael von Blumenthal Slider The Man In The Window