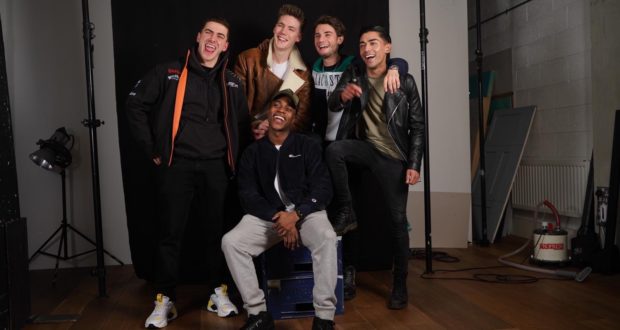 Walking into the performance space we see four soldiers lounging about in a desert camp. There is 2nd Lt Matterson (Robert Wilde) posh boy, sticks to the party line and is undecided about his sexuality.&nbsp;&nbsp; Private Gabriel (Akshay Kumar) is quiet, reserved, artistic and gay.&nbsp; ‘Lads’ Corporal Rayson (Romario Simpson) and Lance Corporal Denaro (Kerim Hassan) are both loud, full of ‘banter’, crude jokes and boisterous physicality.&nbsp; All quite predictable so far.&nbsp; They don’t have much to do apart from sit around waiting for something to happen.&nbsp; They watch the huge fires burning, comment on the amount of drugs&hellip;

Walking into the performance space we see four soldiers lounging about in a desert camp. There is 2nd Lt Matterson (Robert Wilde) posh boy, sticks to the party line and is undecided about his sexuality.   Private Gabriel (Akshay Kumar) is quiet, reserved, artistic and gay.  ‘Lads’ Corporal Rayson (Romario Simpson) and Lance Corporal Denaro (Kerim Hassan) are both loud, full of ‘banter’, crude jokes and boisterous physicality.  All quite predictable so far.

They don’t have much to do apart from sit around waiting for something to happen.  They watch the huge fires burning, comment on the amount of drugs they are required to take and generally try to cope with boredom.  Private Gabriel tries to keep to himself, Ray and Deno indulge in a constant mocking and taunting of their companions while Matterson attempts to keep the peace in between cleaning his gun.  Unfortunately, a little bit of the boredom starts to escape the confines of the stage into my seat.  The blurb promises a ‘. . . devastating and shocking discovery. . .’.   There are two events this could be referring to, but both were signposted so much neither was particularly unexpected.

Act two and it’s five years later. Ray and Deno are both suffering considerably from the painful and debilitating effects of Gulf War Syndrome.  Simpson and Hassan do well in portraying the transformation in characters that were once full of life and energy but are now somehow diminished.  Matterson is in denial but eventually accepts that his symptoms are more than just stress and, for some reason I couldn’t fathom, decides to go to the USA to interview ex-soldiers.  Why not start in the UK?  In Act two Akshay Kumar plays a different character, in complete contrast to Private Gabriel, with relish.

Jonjo McGuire’s set successfully evokes a desert scene by using orange hues, a camouflage tent and webbing all over the walls.  By using half of the already small stage for the first Act he added to the sense of being confined and restricted, despite the vastness of a desert landscape.  There is a complete change of scenery for the second Act, where the stage is split into two separate venues, the small rooms decorated in 80s/90s style still giving the feeling of being trapped but in different circumstances.

A subject deserving of attention, especially for those veterans still suffering who probably feel as though they have been forgotten.  Apart from a very brief reference in passing to the Tuskegee syphilis experiment there was no attempt at any kind of explanation, the significance of Matterson’s sexuality story line completely passed me by, and the play’s rather sudden ending left me wondering what the point of it all was.  On the plus side, the performances are good and the set demonstrates just how much can be achieved in a small space.