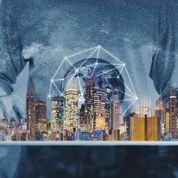 Author: Everything Theatre in Features and Interviews 22 February 2020 0 181 Views

Prior to its opening on 2 March, the makers of the experience spoke to Everything Theatre about what audience members can expect when they plug in, and the relationship, both now and in the future, between theatre and virtual reality.

unReal City is a virtual reality experience for two people, can you tell us a little more about it?

The audience will be entering a Virtual Reality showroom for studio apartments that are currently being built as part of a new Smart City development. The city is still being built, though some of the first residents are already in place. The city is designed to be fully accessible to residents from all areas of the community, including those with learning disabilities and autism.

The unique aspect of unReal City is that the entire city can be accessed through Virtual Reality. This is particularly beneficial for residents who may have a variety of access needs, or who do not wish to leave the security of their apartment. Using Virtual Reality, they can visit any location from the comfort of their own home.

However, does the technology also prevent us from making real connections with each other and our physical environment? Does it dilute the effort that is necessary to genuinely engage with other people? Does it make our lives too streamlined and care-free?

It is running alongside other more traditional theatre at the BAC, is this a good fit?

BAC have an incredibly eclectic programme and are among the best venues for ensuring diversity in the productions they stage. This includes diversity of identity and experience, but also different forms of performance. It feels completely right that we start developing this VR experiment at this wonderful venue.

How long has this taken to bring into existence since the initial idea was mooted?

Tristan and Nick began discussing the idea 18 months ago. After bringing in artists from Access All Areas to develop it further, the piece began to take shape.

Initially, we ran workshops in the streets around Liverpool St Station, encouraging AAA artists to think about the effect that the city had on them as neuro-diverse or learning-disabled people. In parallel, we explored Smart Cities and the increasing use of technology in connecting and simplifying our relationship to the built environment. This grew into wider questions about how the online world affected us as disabled and neuro-diverse people, and as non-disabled and neuro-typical people.

More and more we realised that we were making a piece that was relevant for everyone, regardless of whether we’re disabled or not. New technologies throw up so many questions about how we connect and make connections with others – this is relevant for all of us.

Now, we’re staging a month-long work-in-progress run. There is so much to explore and question with this project, and it feels right to do that in stages. This is the first “prototype”, and the first time the public will get a glimpse of our ideas.

It’s for two people at a time, can you tell us why that is when VR is so often a sole experience? Is there interaction between the two audience members?

The experience can be enjoyed solo or in pairs. Interaction between audience members is welcomed but not obligatory. There will be, however, live interaction with the artists, both inside and outside of the VR world.

The show info states “blending intimate live performance…” does that mean that there is more to this than putting on a headset and being immersed in VR?

Yes – you will be able to interact with each other, with the artists and with the environment.

Do you feel that VR is going to become a more integral part of theatre in the future?

VR will probably remain an “event” activity for a while yet – i.e. an experience that is created and curated for a festival, a special performance (like ours) or perhaps a commercial event or new technology show.

Whilst there is a market for individuals to buy VR headsets and access VR-ready games and films at home, this hasn’t fully taken off yet.

Regarding theatre, you could argue that in the UK it has always been a little slow to embrace change and new ideas, particularly where new technology is concerned.

The technology itself also has some catching up to do. In the tech world, Magic Leap was meant to be the new MR (Mixed Reality) benchmark – a bridge between VR and AR (augmented reality). In reality, Magic Leap turned out to be a slightly disappointing product that needs another two or three further developments before it can be really satisfying for users.

Whether VR, AR, MR or XR – an umbrella term for mixing all of these media – will, or even should, become a more integral part of theatre is still unclear and up for debate. For us, these are fascinating new technologies that perhaps still haven’t been fully exploited artistically.

And what is the future for unReal City come the end of March?

We have ideas but won’t know for sure until we’ve gone through this current process – that will guide us for the way forward. For now, we’re excited to share this experimental stage with audiences for the first time.

unReal City plays at BAC between 2 and 28 March. Each show lasts approxiametly 30 minutes and can be booked up between 12.15 and 10.15. Bookings can be made online at https://www.bac.org.uk/content/45653/whats_on/whats_on/shows/unreal_city