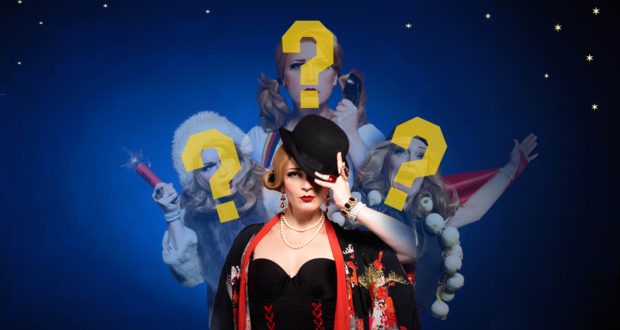 Author: Everything Theatre in Features and Interviews 4 February 2020 0 86 Views

Everything Theatre on How Eva Von Schnippisch Single-Handedly Won WW2

Eva Von Schnippisch was last seen by Everything Thetare whilst she was saving World War Two. After a short break she is back, this time with Hollywood firmly in her sights. But before she heads across the Atlantic, Everything Theatre was lucky enough to catch up with Eva to ask her about her latest exploits and whether we can expect more “pure filth” from her this time around?

Previously you have claim to have apparently single-handedly won WW2, how on earth have you now found yourself involved with Hollywood?

No ‘apparently’ about it mein Liebchen! I DID single-handedly vin WWII! Following zhat I stayed vis Her Majesty’s Secret Service for 10 years, finishing ze contract zhat I signed. After all, I am a vomman of mein vord! Zhen after zhat I decided to do something for myself again: to follow mein life-long dream to become ein Hollywood star of ze silver screen!

So are you still a British spy or are your spying days behind you now?

It’s been three years since you won World War 2, a lot has changed in that time, especially with the #MeToo movement happening; do you think this has affected you and your approach to things?

Everything Theatre described your previous outing as “pure filth” (in a good way may we add), can we expect more of the same this time around? Should we avoid bring our Gran to the show?

Depends how filthy your Gran is!!! Zis show is bigger, bolder und braver zhan ze last, so if you’ve got a sensitive constitution – perhaps stay at home. If you’re villing to be taken to extreme places through ze power of theatre zhen come und let Eva lead you through ze “filth”.

You’re only doing the one night at the VAULT Festival, is this because you are too busy saving the world? And if we can’t see you this time around, where will you be next?

Ja, that’s exactly vhy! Ein One-night-only experience at Vault Festival, so move all your uzzer engagements und prioritise Eva… you von’t regret it! Uzzervise you vill have to come down to Brighton Fringe from May 21-22 at Komedia (tickets on sale now!)  https://www.komedia.co.uk/brighton/cabaret/how-eva-von-schnippisch-saved-hollywood/ . Zhen hopefully it’s going to ze Edinburgh Fringe…. so for now zis is ze BEST und ONLY chance to see it!

So, World War Two, Hollywood, where might Eva go from here?

Not sure…all I know is zhat it just doesn’t seem right to fall short of ein full trilogy does it?! I mean mein life is full of incredibly amazing stories: I just need to decide vitch vun to treat you to next!

Thanks to Stephanine Ware, who is of course Eva Von Schnippisch, for an interesting interview. She will be playing at VAULT Festival on 19 February, tickets are available here.

Previous: For the Sake of Argument, Bridewell Theatre – Review
Next: Patricia Gets Ready (for a date with the man that used to hit her), VAULT Festival – Review