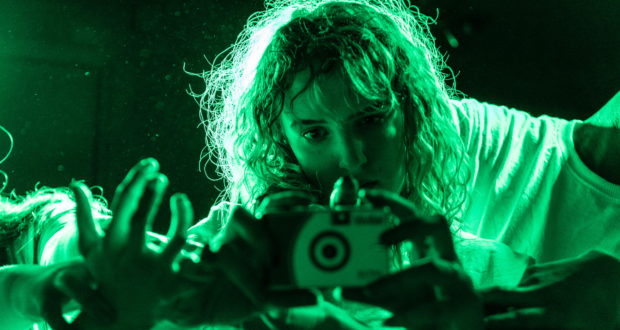 The White Bear took some finding from Vauxhall in the pouring rain, but it was a pleasure to enter and find a traditional pub with a hint of Wilson's Music Hall to it. Friendly, helpful staff made it very welcoming.&nbsp; Upstairs in the House of Commons, however, lay a decidedly sinister environment, as we entered the recreational lounge of a dystopian institution for the criminally insane.&nbsp; From the start it is clear that these inmates are unsettled or unhinged as they jerk and spasm, as if being shocked.&nbsp; Indeed, this is the punishment for anyone here who steps out&hellip;

A show with much to say about how we are categorised in society; that questions who has the authority to judge. You can run but never cross the line...

The White Bear took some finding from Vauxhall in the pouring rain, but it was a pleasure to enter and find a traditional pub with a hint of Wilson’s Music Hall to it. Friendly, helpful staff made it very welcoming.  Upstairs in the House of Commons, however, lay a decidedly sinister environment, as we entered the recreational lounge of a dystopian institution for the criminally insane.

From the start it is clear that these inmates are unsettled or unhinged as they jerk and spasm, as if being shocked.  Indeed, this is the punishment for anyone here who steps out of line, in a work that has a touch of Ishiguro’s fictional Never Let Me Go, but is actually based on true stories. The six characters are a diverse representation of society, all deemed to have committed a crime and are waiting for a trial decision.

Unfolding enigmatically, their conversations reveal who they are and why they are there. Murder is confessed to, but guilt is a harder thing to ascribe to someone, as is madness.  The dilemma of who can pass judgement on what counts as crazy or criminal in a society that can condemn someone for being themselves, or for what they are driven to do by their environment, is a salient one: the unseen finger pressing the shock button reminds us that these rules can be set beyond our control.

Jude, a black, gay young man at one point asks “what do they call us out there?” and this play challenges the tendency of society to categorise and define nonconformist characters. Peta, in her wheelchair, demonstrates stoic acceptance of her inevitable fate. Disabled in society, barely seen or heard, she is the speaker of the House, supporting the others through their ordeal, whilst she is literally unable to stand up for herself. Cynthia has possible mental health issues and tries to be friendly but ironically it seems it is this quality that has condemned her. Andre is blind but always listening and channelling the tensions of the group.  Lara is being tried for murder, but can her crime be justified? Tina seems the most conventional of all, but her secret is dark and insidious. You can’t tell just by looking…

The cast maintain tension effectively as strains between the characters relentlessly build in this hothouse environment. Jay Lafayette Coward plays the character of Jude boldly, adding both welcome comedy and pathos; camping it up when necessary, but providing a poignant foil to the chilling Tina as we learn of his backstory.  Ironically, he is only free to be his real self when imprisoned.

Sarah Collins Walters as Lara delivers with striking lyricism when she details the precise murder of her manipulative boyfriend, in a scene which throws into relief the fine line between love and cruelty.

The production is sparse, but this works well in the intimate space, and the strong cast keep the story moving along at a pace.  There is some faltering at times; first night jitters perhaps? And the tannoy announcements clumsily overrode some of the lines. But this play shows potential to develop into a sharper work, raising some interesting thoughts.