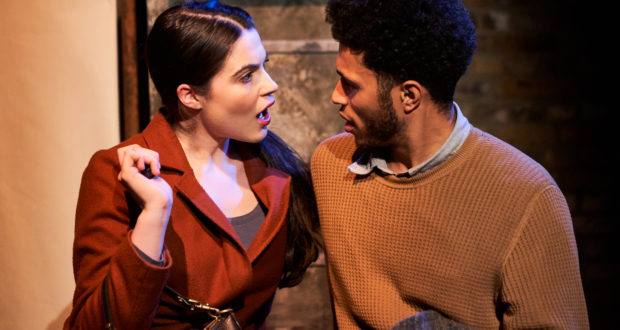 Knut Hamsun’s radical 1890 novel Hunger is widely acknowledged as the first modernist psychological narrative. Without it, some say, the novel would not exist as we know it today.&nbsp; As source material, it therefore sits ripe for brave, inventive reworking on stage. There is also the slight matter of the author’s unfortunate&nbsp;fascist tendencies to consider, which is surely a call to arms to be referenced and challenged head on. Sadly, this Arcola and Jump Spark production of Amanda Lomas’ adaptation does not quite get there.&nbsp;Hamsun’s meandering plot is run through speedily as a series of rather functional vignettes. They&hellip;

Despite a charming lead, skilful ensemble work and attractive design, Hunger never quite brings its challenging source material to life.

Knut Hamsun’s radical 1890 novel Hunger is widely acknowledged as the first modernist psychological narrative. Without it, some say, the novel would not exist as we know it today.  As source material, it therefore sits ripe for brave, inventive reworking on stage. There is also the slight matter of the author’s unfortunate fascist tendencies to consider, which is surely a call to arms to be referenced and challenged head on. Sadly, this Arcola and Jump Spark production of Amanda Lomas’ adaptation does not quite get there.

Hamsun’s meandering plot is run through speedily as a series of rather functional vignettes. They chart a young man’s descent from happy-go-lucky student to homelessness and squalor. It is self-consciously set in a no man’s land between 19th century Norway and contemporary London. We, perhaps, need to feel the struggle is real and closer to home for it to have an impact. As the unnamed protagonist, Kwami Odoom is believable and fun, especially early on.  His performance has charm in spades, which is fortunate because he is never off the stage.  He has little to work with, however, once the descent into raving self-destruction begins. There is nothing to explain why trips to the pawn shop slide into eviction and ultimately scrabbling for morsels of food in the dirt.  Why doesn’t he land at least one of the jobs he applies for? Dumb bad luck isn’t all that satisfying, narratively speaking.  It doesn’t help that he rarely looks genuinely ruffled by his fate.  His nice guy knitwear stays neat and clean throughout. This is a portrait of mental illness that feels toothless and safe.

The impressive ensemble, Archie Backhouse, Katie Eldred and Jessica Tomlinson, play multiple supporting roles with skill, although I wish they had resisted the temptation to give us an unnecessary and distracting international tour of accents. Director Fay Lomas and movement director Natasha Harrison (with associate Georgina Mackhubele) also have a ball flinging them around the stage to liven things up. The moments of physical theatre are well-crafted and performed, but there’s nothing challenging or particularly original about them. The cast bump into each other to represent busy street scenes and signpost important things in, you guessed it, slow motion.

We live in the era of the mental health confessional. We are more likely to hear of real struggles than those of fictional literary figures these days.  There will be countless one-person shows tackling declining mental health at the 2020 Edinburgh Festival, for example. They are each likely to provide more insight than we gain here. We know that unemployment sucks. We also, sadly, know more about food poverty than we should in a functioning society.  Why go back to a novel written 130 years ago to explore these ideas? It is a question this production and its rather pedestrian text do not really get to grips with.

There is impressive design work both from Anna Kezia Williams and from Rajiv Pattani on lighting, making full use of the Arcola Studio 2 basement space. The impressive soundscape includes original music from Lex Kosanke. This provides welcome nourishment for the eyes and ears at least. There is, however, little meat elsewhere.

Based on a novel by: Knut Hamsun
Adapted by: Amanda Lomas
Directed by: Fay Lomas
Design by: Anna Kezia Williams
Produced by: Ellen Spence
Booking link: https://www.arcolatheatre.com/whats-on/hunger/
Booking until: 21 December 2019

Previous: Before I Was A Bear, The Bunker – Review
Next: Candida, Orange Tree Theatre – Review