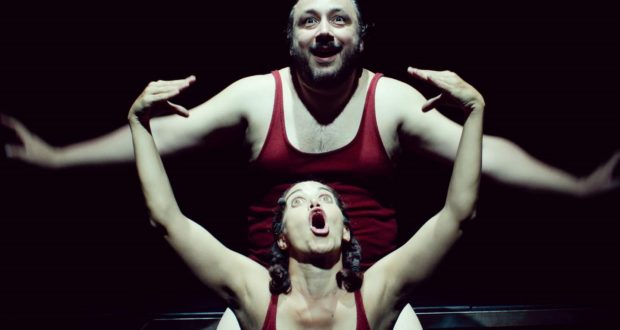 It is performed with courage and unwavering dedication by Silvia Gallerano and Stefano Cenci, under Simon Boberg’s forward-thinking direction. The pair play two young siblings giving an account of the mundane events happening around them. The neighbour washing his car, the evil landlord growing tomatoes, the dad spending most of his day at work.

As time passes, their descriptions become increasingly disturbing, surreal, yet reported with the same fresh-eyed spontaneity. These are intertwined with abrupt intersections of a much darker nature. There are recurring references to concentration camps, although the stripy uniforms here are pink and black.

The plot is inconsistent. Every time a point is about to be made a new digression is introduced, with a handful of strong images drowning in meandering repartees. Amongst them, the exploitative use of children in the showbiz, as well as their constant exposure to sexualised contents. The elderly are disposed of without remorse and everyone is subjugated to the control of the Police.

With such an irksome script, Happy Hour is one of those plays that make us leave the auditorium without a clue of what has just happened on stage. Yet it’s so out-of-the-box that it will get everyone talking. Truth is that it’s not that pleasant to watch, its meaning – if any – is rather obscure, but Gallerani and Cenci are worth the price of the ticket alone. Besides, the DJ Blue Cat’s tune “Caracalla” that serves as a soundtrack is so catchy it will linger into the mind for days and days.