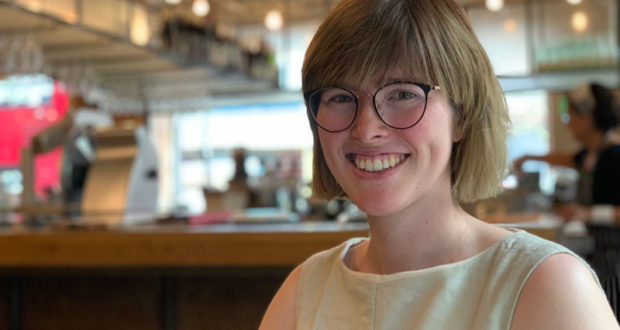 ImmerCity stage site-specific immersive murder mysteries. The three shows to date have been set in The London Museum of Water and Steam, Kensington Library, and St Matthew’s Church in Bethnal Green. They all follow the same format: the audience plays in groups of six or seven, each person following one of the actors as they move through different spaces and interact with other members of the cast. In the interval, each audience group reconvenes to discuss and compare what they’ve seen, piecing together the clues they’ve eavesdropped. Then in the second part, they get five minutes to interview each of the characters, in an attempt to discover the identity of the murderer, before the final act in which the truth is revealed.

These hugely enjoyable shows are devised, directed and produced by Rosanna Mallinson, the company’s Artistic Director. We caught up with her over coffee in a break between shows.

ImmerCity shows are site specific. Which comes first, the idea or the site?

The site always comes first. I had a friend who was the guardian of an abandoned mansion in Westminster, called Vine House. It was the most spectacular place: it had silk wallpaper, and a sunken garden. So we put together our first mystery, called Suicide at Vine House. And we thought, let’s take the concept and develop it for different sites. I started messaging every historical venue in London – I sent 400 emails out – and the only one that came back was the London Museum of Water and Steam. We looked around, and we researched the local area. And then we started coming up with ideas.

The steam museum, the library, the church – these places are not used to putting on live performances. How did you persuade them?

They’ve all had small scale performances of some kind before. The Steam Museum have weddings and events in their central hall, but no one else has used the space quite so vigorously before. I saw a show about Frankenstein at the Kensington Library, so they already had a precedent of allowing people to go down into the archives. I think people are generally very excited to be allowed into fenced-off areas in the library, or into the museum after hours.

Your idea of having six audience members in a group, with each one of them following one character – that’s unique, isn’t it? The fact that not everyone sees everything, so you have to compare notes.

I got the idea from Punchdrunk. When I first went to see Sleep No More [Punchdrunk’s immersive take on Macbeth] in New York, I went with my boyfriend at the time. And the second we got there we’re like, okay, we’re splitting up, I’ll see you in three hours. So we went off. And one of the most enjoyable parts of that was saying, ‘oh, I saw this in that room, what did you see?’ The coming together and sharing is what makes the work feel a lot bigger, and it makes the world feel like it’s richer. Because obviously in real life, you don’t see everything all the time. You never have all of the story. In the first half, we want to make it slightly more passive, because people get a little bit scared when they first arrive, so we don’t want them thrown into a situation where they immediately have to interact. This way, people are watching with the knowledge that they’re going to have to use the stuff that they’re watching to participate later on.

And you have a maximum audience number of 36?

We’ve worked out that we can go up to 49, which is seven groups of seven. So in the second half, there is one search clue, plus five suspects and the victim. It’s a lot about doorways: you have to be able to get 14 people through a doorway, in different directions. So I think the maximum maximum capacity ever would be 49. Assuming that we can find wide enough doorways!

Even if you have your maximum 49, how do the finances work out?

I am the entire team – including stage management and box office, and managing the online social media and costume design – apart from David, who writes the dialogue. It’s the most effective way to keep the costs down. The money from ticket sales goes to pay the actors first. And then everything after that is considered the profit, which allows me to pay the actors properly.

One of the really impressive things is the calibre of the actors: they have not just stay to in character, but also to understand the backstory, and field questions from the audience. You need a particular kind of actor to be able to do that.

We have a two part audition process. The first part is monologue, and the second part is improvisation. You can always tell the people who are comfortable in that situation, and those who get a bit nervous. Sometimes people will come in, and you can tell they’re a phenomenal actor, they do an amazing monologue, and then in the improvisation they get stuck in a weird little loop. They keep saying the same thing. I normally get about 150 actors in the shortlist, of whom I will see about 50 or 60. Then I’ll bring in two ultimate casts for the callback. So I’ll see 12 for the final round.

How long is the the rehearsal period?

It depends how close to the wind we’ve ended up sailing. Most of the venues we work with don’t always understand how long it takes to make theatre. They’ll be like, okay, so we finally done all our bureaucracy, and we’re going up in a month. And we say okay, great, well, we’ll put it up in a month then.

Do you ever act yourself?

No. I sometimes play Jack Daw [the master of ceremonies] in extreme circumstances. It’s very hard to direct and act, it’s such a different headspace. Jack Daw is about looking after the audience and making sure that they understand what’s going on, and don’t get lost or confused. So they have someone who’s not focused on being murderous that they can have a chat with – they can’t ask the cast where the bathroom is, or stuff like that.

Immersive theatre is a relatively new thing, but I’m seeing it everywhere. Why do you think that is?

It gets a different audience, from a slightly different world. I mean, you have your normal theatregoers, but then you also have a lot of people who don’t really go to the theatre, but who do go to immersive or interactive events – people who really enjoy video games or puzzle games, who enjoy escape rooms. Immersive theatre offers something more than being stuck in front of a screen. It gets people out of their passive frame of mind.

What would be your ideal venue for show number four?

I have contacted many times but never seem to be able to get through to Transport for London. They’ve got a lot of abandoned tube stations. They’d be ideal, because they’re so spooky. And their doorways are all really wide, so we wouldn’t have the doorway issue, which means we could go up to a slightly bigger capacity. And also the tube is so rich in its history, and so atmospheric. I think that would be really awesome, because sound travels really uncannily through those spaces. They’re a hard nut to crack, TFL.

Full details and booking at http://www.immer-city.com/wp/?page_id=481.