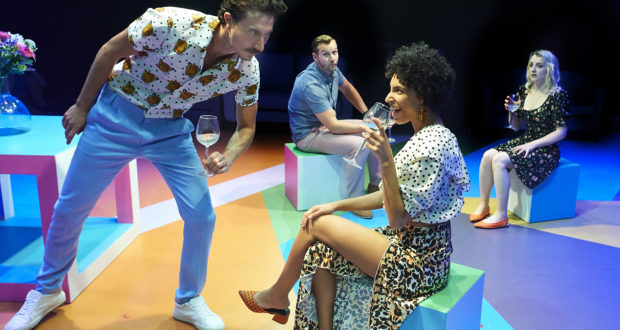 Games For Lovers, The Vaults – Review

Games For Lovers, The Vaults – Review

A virtuoso comedy of four characters looking for love

Proceedings start with a bang as the brilliantly energetic opening scenes provide key background information on the characters, punctuated by infectious music and movement, all played out against Simon Scullion’s beautifully colourful abstract set.

The most immediately visible of this quartet of millennials is the grossly overconfident Darren (Billy Postlethwaite), a self-identifying “playa” who’s clearly read The Rules or something similarly toxic in regard to ensnaring the opposite sex. Logan (Calum Callaghan) is blokeish but paranoid, Martha (Evanna Lynch) is perpetually insecure, and mysterious Jenny (Tessie Orange-Turner) has secrets that she keeps hidden behind a Teflon chutzpah.

After the frenetic opening, the characters settle into intertwined relationships. Logan moves new girlfriend Jenny into his house too soon, while his friend Martha ends up flat-sharing with Logan’s old college chum Darren, despite her revulsion at his ludicrously deluded alpha male persona. It’s huge fun spending time with these characters as they blunder through their young lives, scripted with perfect precision.

The second half opens with the cast whizzing around on scooters, jazzily philosophising about the history of relationships since the dawn of time. It’s another jubilantly active sequence from director Banks, who excels at constructing these visually stimulating and deliciously odd set-pieces. I think he could give Rupert Goold a run for his money in terms of energy and imagination.

The four players are brought together for the first time at a dinner party at which one of Darren’s many pseudo-psychological games sets some cats among the pigeons. Exacerbated by a deliberate deception from arch manipulator Jenny, relationships between the quartet disintegrate. But in what arrangement – if any – will they re-combine?

This is a superbly accomplished production of a masterful script. Postlethwaite makes Darren an almost loveable monster, and if we don’t really get beneath the surface of Jenny, who cares when Orange-Turner portrays her with such delightfully deadly cunning? Logan and Martha are less showy parts, but Callaghan and Lynch give it their all, and together the ensemble create a recognisably flawed and floundering bunch of characters.

I’m not sure that Games for Lovers has anything profound to say about modern day relationships, but it’s a joy to witness the age old games of love being re-enacted with such brio.