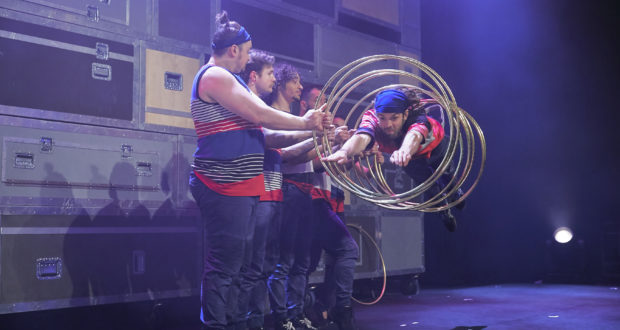 It’s a warm, barmy evening along the South Bank, just the type of evening that makes the Underbelly festival a perfect place to be. Within its inner hub, the bars and food outlets are buzzing with activity, the whole place crowded as people wait to enter one of the two tents for the evening's shows, or maybe just enjoy a drink and the atmosphere the place has to offer. Given how many people there are, the latter seems very likely as there does appear a lot more people than the two venues could ever hold. Tonight we’re here for&hellip;

Another show of breathtaking skill and light heartedness that showcases the range and skills of its fun-loving performers.

It’s a warm, barmy evening along the South Bank, just the type of evening that makes the Underbelly festival a perfect place to be. Within its inner hub, the bars and food outlets are buzzing with activity, the whole place crowded as people wait to enter one of the two tents for the evening’s shows, or maybe just enjoy a drink and the atmosphere the place has to offer. Given how many people there are, the latter seems very likely as there does appear a lot more people than the two venues could ever hold.

Tonight we’re here for Transit, the new show from Quebec’s Flip Fabrique, who wowed audiences in the same venue last year with Catch Me. As we take our seats, this could almost be last year’s show, with its bare performance space except for the rear decorated wall. But whereas for Catch Me this wall looked like a house, for Transit it’s like baggage piled high.

From the very opening moments, it’s clear that Transit is going to be another playful affair. As a large air cargo crate slides free from the wall, there is banging and shouting from inside. Enter, stage left, Jade Dussault, the only female of the six-strong troupe, to unlock the crate and reveal the five males, crammed into the tight confines. And thus commences an hour of first class performance, showcasing the amazing range of skills of every member. It’s a varied show; Jeremie Arsenault’s diabolo, Dussault’s hoops, Pierre Riviere’s straps, plenty of juggling involving every member of the team and of course the grand finale of the trampo-wall, the speciality of Jonathan Julien, Jasmin Blouin and Cedrik Pinault. Not that each performer is restricted to their one speciality, each and every one is multi-talented and the interchange is endless.

There is a (slight) narrative thread that binds the show together. That title, Transit, being a major clue. However it’s transit in both physical and personal terms. Early on there is the image of rushing through airports as the troupe travel from show to show, but later this turns to thoughts of moving in a personal way, as they discuss what they would do if this were their final performance. Really, though, this is a very simple tool to allow for some further tomfoolery as they all get to live out their fantasies. It’s very playful and infectious, never more so than when underwear is liberally thrown out to the audience so we can fulfil one performer’s wish to be bombarded by underwear as he enters the stage!

The playfulness remains throughout, as we witness some incredible performances. Even when some moments don’t quite work out, a juggling club dropped, a stray hula hoop, it really doesn’t matter one iota. The sheer joy and skill of what does go right makes up for any little errors. In fact, if anything, the small errors allow us to appreciate just how difficult it all really is, however easy they make it look most of the time.

There are not quite the same individual “WOW” moments as in last year’s show. Instead, Transit feels much more a group effort, with the solo performances kept to a minimum and replaced by more ensemble pieces. This is in no way a bad thing though, because when all six are this talented, why keep them off the stage for too long.  But even without the bigger set pieces, Transit is still a joyous experience as the packed audience clap and cheer the extraordinary feats in front of us.

It’s a perfect performance, one that justifies the existence of this lovely little world of Underbelly that appears on the South Bank each year, and hopefully will continue to do so for years to come.