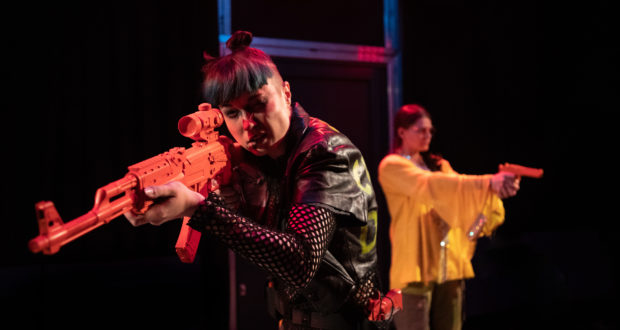 Kudos to the Pleasance for snaffling this big, brash and brilliantly executed Australian export for us lucky Londoners. It’s timely too, providing a perfect antidote to the doom-laden predictions dominating our current news agenda.&nbsp; The show sets out its desire to perk us up and help us find our mojos by having Haddaway’s classic ‘What is Love?’ pumping over speakers as we take our seats. OK, it’s mashed up with Australian political speeches, but it’s that kind of evening. &nbsp;&nbsp; The action unfolds at a rollicking pace, tearing up the rule book as it scatter-guns its way through scenes.&nbsp;&hellip;

A lovingly crafted satirical swipe at climate change issues that remarkably, given its predictions of catastrophe, provides a welcome shot of optimism perfect for today’s jaded and cynical times

Kudos to the Pleasance for snaffling this big, brash and brilliantly executed Australian export for us lucky Londoners. It’s timely too, providing a perfect antidote to the doom-laden predictions dominating our current news agenda.  The show sets out its desire to perk us up and help us find our mojos by having Haddaway’s classic ‘What is Love?’ pumping over speakers as we take our seats. OK, it’s mashed up with Australian political speeches, but it’s that kind of evening.    The action unfolds at a rollicking pace, tearing up the rule book as it scatter-guns its way through scenes.  Fans of ‘proper’ theatre and formality should probably look away now.   We’re treated to something a lot more fun. It is part movie parody, part sketch show, part stand up and, I’m not making this up, part cultural history of late eighties and early nineties rave music.

Readers of the recent Everything Theatre interview with playwright David Finnigan will know the show has a controversial history of antagonising right-wingers both at home in Australia and in the God-fearing US of A. In a meta move, this back story is referenced throughout via simple direct narration from a decidedly hipsterish version of Finnigan (Nathan Coenen). Thanks to Coenen’s performance and neatly judged writing, putting the author centre stage stays firmly the right side of self-indulgence. His interjections are brief and witty and delivered with the lightest of light touches. Even digs at the audience (one poor chap was outed as a suspected Daily Mail critic, for example) are done with a wink and a smile. It’s a pleasure to report such charm is undoubtedly Kill Climate Deniers’ great strength. Contrary to fears of malice or extremism, everything here has been brought together with a huge dollop of love by director Nic Connaughton, taking a break from his day job as the Pleasance’s Head of Theatre. There’s a lack of anything remotely cynical in his, or any of the other creative team’s, choices. Failing to enjoy the rapid-fire gags, home-spun props or drunk wedding style choreography might be a sign you are dead already, frankly.

The central double act of clumsy Australian Environment Minister, Gwen Malkin (comic Felicity Ward in her theatre acting debut) and dippy Press Secretary, Becken (Home and Away’s Kelly Paterniti) is the source of most of the laughs. Their barbed power struggle feels reminiscent of The Thick of It or blast from the past Yes Minister. Although, as far as I know, neither Malcom Tucker nor Jim Hacker paused the action to discuss the cultural importance of infamous dance-rock one hit wonders EMF. Fear not, Ward and Paterniti embrace the unbelievable silliness without skipping a beat. As gun toting lead terrorist Catch, Bec Hill effortlessly drives the plot forward. She perhaps has the hardest job keeping us on side as a nominal baddie – at one point mercilessly shooting a journalist after slamming the media’s need for continuous debate and false balance. It’s alright though, she knows exactly what she is doing. Her eyebrow is constantly raised challenging us one second and making us complicit in her actions the next.  Hannah Ellis Ryan completes the strong cast and shines delivering a powerful monologue, to a rave backing track of course, asking us to imagine our bleak futures. All but Coenen also take on numerous other smaller characters including a cast of radio shock-jocks and soft rock titan’s Fleetwood Mac who, spoiler alert, come to a sticky end.  There is a lot of skill on stage and fans of comic timing will relish moment after moment. These include the kind of ad libs and breaks in the fourth wall that come from having total confidence in your material.

Those who have come for the politics aren’t forgotten. As the fun progresses, there is an attempt to engage us with the debate between climate activists and deniers. It’s expressed as self-doubt from Finnigan. Is he certain he’s right? Should he countenance the other side of the argument? I think, and I stress think, the conclusion is climate deniers are to be embraced. Befriended, even. We’re all on the same team just arguing over the details.  The argument frustratingly remains woolly and, ironically perhaps, lacks the clear killer blow it needs to hit home. No real harm done though. What sticks in the memory is the heart behind everyone’s work. No stone remains unturned in the hunt for good natured humour. Hearing the glorious codenames the terrorists have chosen for themselves is honestly worth the ticket price alone. Kill Climate Deniers is not the lefty millennial polemic its critics fear. It wins hearts and minds, yes, but through being joyful, skilfully played and, most importantly of all, laugh-out-loud funny. Book a ticket and lift your spirits, London. You’ll thank me.