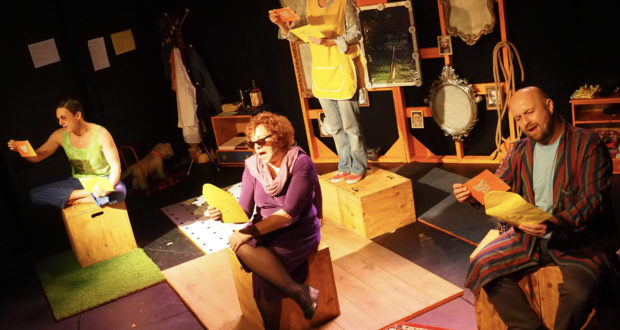 The posters displayed around the always welcoming lobby of Waterloo East Theatre ask the questions “Love Kylie? Love the 90s? Love Soap?”. The worrying thing is I can confidently state the answer is “no” to two of these questions; as for the 90s, I have vague recollections of them, usually of being in some dark dingy venue watching long forgotten bands. So even before taking my seat I was a little concerned I was not the shows target audience. Thankfully Summer Street – The Hilarious Aussie Soap Opera Musical (to give it its full name) really isn’t dependent on&hellip;

A musical that might send up all the Aussie soaps of our youth, but does so in such a gentle way it's near on impossible not to smile the whole way through

The posters displayed around the always welcoming lobby of Waterloo East Theatre ask the questions “Love Kylie? Love the 90s? Love Soap?”. The worrying thing is I can confidently state the answer is “no” to two of these questions; as for the 90s, I have vague recollections of them, usually of being in some dark dingy venue watching long forgotten bands. So even before taking my seat I was a little concerned I was not the shows target audience.

Thankfully Summer Street – The Hilarious Aussie Soap Opera Musical (to give it its full name) really isn’t dependent on answering yes to those questions, just knowing of the existence of all those Aussie soaps is probably enough to allow you to enjoy this very tongue in cheek but loving homage to a period of time when it seemed sun streaked Aussie soaps would take over our televisions, whilst half the cast of the shows were at the same time taking over our pop charts.

From the very start, Summer Street makes its intentions clear; four quick scenes depicting each of its four stars demise from their staring roles in the soap opera bearing the shows name. In true soap fashion, their demises are completely over the top, as is the script, acting and very often the accents. The four actors are invited to reunite five years after the soap left the airwaves for a special one-off show, and each quickly accept for their own reasons; the need for the money, an attempt to resurrect a career, to rekindle a past love. What follows is pure pastiche, as they rehearse for the show and examine their lives since leaving the soap, real life and make-believe merging all too often.

The soft humour allows the show to flow, and it’s clear that writer (as well as director and musical arranger) Andrew Norris does have a love for the shows he is parodying. As the cast reunite, they question how four actors can play eight parts, to which they point out how they have all played multiple characters in the past, some even returning from death, with the audience never questioning it. By the time the shows dog is introduced as a stuffed toy on wheels, the audience are just nodding perfect acceptance to the next liberty take.

Musically its as entertaining as the script is between the songs. Lucky Plucky Me! Is pure Kylie, complete with ridiculous dance routine, although that dance routine pales in comparison to the one performed by Sarah-Louise Young for Chains Around My Heart, which is so full of clichés that it becomes almost impossible to work out where one cliché ends and the next starts. Kudos to choeographer Lauren Chinery for not holding back on any of it. For all its humour though, there are moments of reflection that allow a little more depth than the rest of the show, especially Take The Knife, a gentle duet that demonstrates the vocal powers of Young and Julie Clare.

The four strong case, Myke Cotton making up the quartet, perform exceptionally, in fact it does feel at times that they are having as much fun as the audience themselves. It is simply impossible not to smile and laugh as they head full-on to the final scenes of the soap, including a starring role for that dog on wheels and a last little twist that again demonstrates the writers understanding of the era.

Summer Street is a delight, a show that doesn’t rely on any great knowledge of the shows it so politely sends up, all it requires is for you to put aside any realism for a couple of hours, accept that a dog on wheels can save the day and that by donning a different wig an actor can quite easily play two parts in the very same scene.