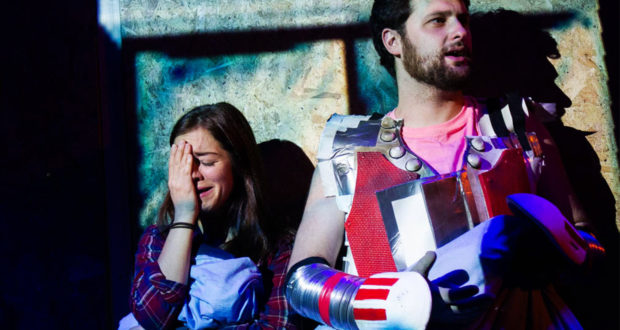 Is mental health funny? Is it acceptable to laugh about depression? Fledgling Theatre, makers of Neck or Nothing, definitely vote yes. &nbsp;The good news is they have created a warm, accessible and laugh-out-loud show as a result. It might well prompt a few of the ‘checking in’ conversations men are increasingly encouraged to have with their mates too. This is presumably why charity CALMZone has backed the project and why there are Q&amp;As with them about the issue planned at future performances. We are watching clearly unwell, but not unlikeable, Jens (James Murfitt) as he invents stuff in his&hellip;

A fresh, if uneven, take on mental health that is at its best when it fully embraces its comedy strengths.

Is mental health funny? Is it acceptable to laugh about depression? Fledgling Theatre, makers of Neck or Nothing, definitely vote yes.  The good news is they have created a warm, accessible and laugh-out-loud show as a result. It might well prompt a few of the ‘checking in’ conversations men are increasingly encouraged to have with their mates too. This is presumably why charity CALMZone has backed the project and why there are Q&As with them about the issue planned at future performances.

We are watching clearly unwell, but not unlikeable, Jens (James Murfitt) as he invents stuff in his brother Frank’s (David North) garage. We also see him increasingly ignore his incredibly patient wife, Martha (Katy Daghorn). The story is apparently based on a cult documentary, Project Grizzly, however this doesn’t seem required background knowledge at all.

Jens is, for the most part, good company. His history of depression and childhood trauma is strongly referenced, but never explained. The lack of a neat diagnosis is a strong choice. We all have our struggles to, well, bear after all.  Jens becomes an everyman. He could truly be any one of us.

Neck or Nothing is at its strongest when it shares the ridiculousness of Jens’ life with us. Even if that means breaking the fourth wall and giving us a knowing wink. It scores highly when the performances are broad, prop and costume choices are wacky and the punchlines come at a pace. You get the sense this is where the company’s heart lies. They do it with such aplomb.  However, things are distinctly less assured when they aim for more emotional truth. What feels fast, free and funny becomes slower and more constrained by weighty messaging and rather static melodrama in the final third.

The narrative is slight, which doesn’t help either. There are very few, if any, actual edge-of-the-seat moments to report. Jens and Martha’s marriage seems the focus and it is not a spoiler to say it is not in great shape. The lack of specific background becomes a problem because the couple’s arguments quickly become generic. We see marriages break up on stage all the time. Martha complains about feeling unfulfilled and wants to leave the small town where she grew up and go and see the world. So far, so predictable. This felt a huge missed opportunity to explore the reality of loving someone with depression, which is surely full of unexpected dramatic incident and conflict.  Katy Daghorn does her best and clearly is a fine actress, but Martha spends way too much time looking passive, wistful and sad here.

Cast members have a difficult time with the writing elsewhere. If James Murfitt delivers some of his monologues like TEDtalks, it’s because I fear they are written that way. David North has a final angry rant as Frank that feels at least three pages too long.  Occasionally, the absence of words is a challenge too.  Having Jens stomp around woodland, looking out into the mid-distance and growling, as the finale approaches, feels a big ask for audience and performer alike.

All this is in the context of wanting way more of the team’s irresistable jokes, of course. There are individual moments throughout reminiscent of the Mighty Boosh or League of Gentleman at their finest. For example, North and Daghorn deserve a spin off show for two local Radio DJs that arrive fully formed and hilarious.  Murfitt doesn’t exactly drag up, but has a lot of fun as grotesque party host, Diane too.

The technical aspects are also memorable. There is a lot of skilfully edited projection.  At one point, this is used to literally transport Martha to a happier place. Video and lighting designer Rachel Sampley deserves credit for bringing such life to the relatively dark and poky Pleasance Downstairs. Talking of Sophia Pardon’s set and costume design in detail risks a huge spoiler. Suffice to say she delivers exactly what is needed with skill and imagination.

The fact Neck or Nothing exists is worthy of celebration. It is uneven and imperfect, but still acts as a welcome positive alternative to the more angst-ridden, darker theatre about mental health we’ve perhaps become accustomed too.