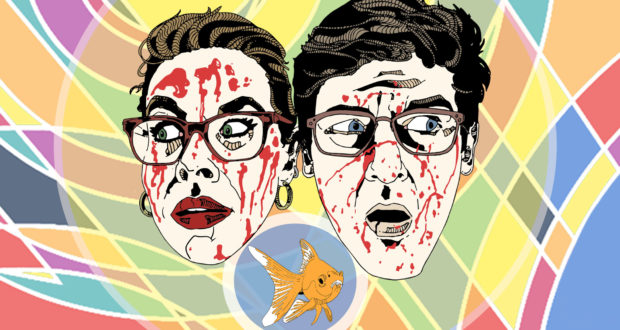 "Cigarette, dear?""No thank you, dear.""I think I might have a cigarette, dear.""No you won't, dear.""Very well, dear." And so the scene is set: in two inflatable armchairs, presided over by a goldfish on a gold pedestal, sit Mr and Mrs Fox. She - in a luminous, captivating performance by Alice Marshall - is domineering, supercilious, wilfully mispronouncing words and oblivious to the feelings of those around her; he - a foppish, Wooster-like Jack J Fairley - is an ineffectual, waistcoated dilettante who chooses not to go to the office because he has enough money already. "Those who have to&hellip;

A hilarious absurdist farce, impeccably performed, but at least an hour too long.

And so the scene is set: in two inflatable armchairs, presided over by a goldfish on a gold pedestal, sit Mr and Mrs Fox. She – in a luminous, captivating performance by Alice Marshall – is domineering, supercilious, wilfully mispronouncing words and oblivious to the feelings of those around her; he – a foppish, Wooster-like Jack J Fairley – is an ineffectual, waistcoated dilettante who chooses not to go to the office because he has enough money already. “Those who have to work for money simply don’t deserve it,” he declares.

The Foxes have only a tenuous grasp on how the world works. They cower on the floor when the doorbell rings, horrified by the unexpected sound; while reading two different newspapers, they’re convinced the stories are made up and modelled by actors, aghast to discover the same story appearing in both: “Plagiarism is possibly the greatest crime of the modern world, punishable only by thumbscrews.”

They’re supported by their Eastern European maid, Rhoda (the excellent Grace Hussey-Burd, her sentence construction more Yoda than Bulgarian), a dreamer who regards her employers’ foibles with amused contempt. When the pair receive a visit from newly widowed friend Mrs Pleasingdale-Boshington-Worrell, Mrs Fox delights in repeating her name at the end of every sentence, while constantly referring to her own “still-breathing husband”; Mr Fox also takes pleasure in getting her name wrong, with an inventive selection of near-miss alternatives.

Into this cosy yet barbed world comes Detective Spectrum, played with tremendous energy by Ben Lydon, and a fake journalist, Billy (a charmingly naive Ken Thomson) who believes Mr Fox to be his father. Add a bookshop assistant crushed to death beneath a wardrobe, a single-lung postman-cum-policeman and a couple of extra characters who bear no relation to the rest of the action, and the result is a frequently hilarious, absurdist farce that falls somewhere between early Stoppard and N F Simpson.

Jack Robertson’s script is peppered with one-liners and comic exchanges. “Have you always been a policeman?” Mrs Fox challenges the erstwhile postman. “Not always,” he replies, “for many years I was a child.” The comic timing is spot on, and the cast perform with tight, exuberant energy though Alice Marshall’s Mrs Fox deftly steals every scene.

I really wanted to give this hugely entertaining show four stars. But at over two and a half hours it’s at least an hour too long. Act Two, set in an unknown location, accompanied by the sound of seagulls, features one actor rambling inconsequentially while the other silently eats a bowl of soup. It’s funny and neatly played, but it has no connection with the rest of the drama and only serves to extend what’s already an overlong show.

If the company wants to take this show to the Edinburgh Fringe, its natural home, they’ll need to halve its length in order to attract an audience. It doesn’t just need pruning, it needs hacking back to the bone.

Previous: WOW Everything Is Amazing, Battersea Arts Centre – Review
Next: After the Dance, Bridewell Theatre – Review