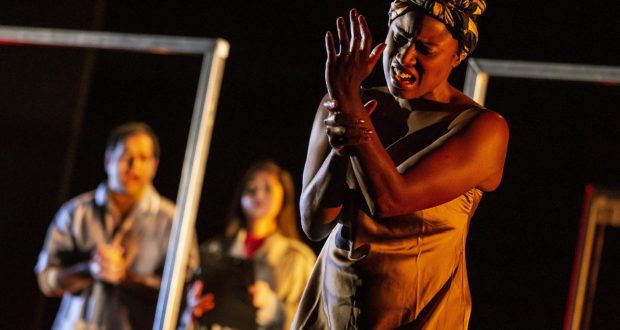 The “Scottish Play” is coming back to London this March, as a new production by Proteus Theatre Company transports Macbeth to another terrifying time: the trading room floor during the 1987 stock market crash. Ahead of the show’s upcoming London bow at Jackson’s Lane, actress Alexandra Afryea shares how the company is taking on Shakespeare’s bewitching tale – and why Lady Macbeth deserves more compassion than you’d think – in this guest blog.

Shakespeare was an actor, writing for actors. He got it; he knew what actors want to do. They want to be dramatic and they want to express themselves – to act. I have always wanted to play a major Shakespearean role on a professional stage in London. I have appeared as Maria in Twelfth Night alongside Mark Pellegrino in Los Angeles, but not here, not where it all started. With the recent increase of all-female productions and colour-blind casting, I hope these opportunities are likely to increase.

I think Shakespeare still matters to audiences after 400 years because his themes are still relevant. You can change the location or the time period of his plays without losing any of the quality. The ideas he explores are universal: stories about the human condition that almost everyone can relate to on some level. Loyalty, belonging and family unity are timeless concerns, whether in the Jacobean era or post-Brexit.

Our production of Macbeth is an ensemble piece, and that idea of company work has been a huge part of this experience. Even the audition was an incredibly positive workshop led by our director Mary Swan and producer Fergus Evans. At the time, I didn’t even know which character I was auditioning for – it was just me and twelve other amazing actresses in the room working together.

I do think if they had said, ‘This is an audition for this particular role’, it may have made people and their performances more singular. Instead, the process brought us all together in fantastic ways. I was in awe of the other women in the room’s talent; their energy was invigorating. I went away thinking that even if I didn’t get the job, I really enjoyed the experience. It can be rare to step out of an audition and think, ‘I really enjoyed that’, but I did. This reassured me that I wanted to work with Proteus as a company – I loved what they were doing and I knew that we could have fun working together.

Our director Mary has taken a really fresh approach to the production to ensure that her interpretation is made relevant to modern audiences. As an actor, you make choices – sometimes bold choices, sometimes less so. Her rehearsal room is always a fun and safe environment, as she really encourages us to express ourselves. She allows you to be free, but don’t get me wrong, she will rein you in if you need it. It has been fun working with the team and my castmates, and I will miss this time that we have spent together as an ensemble.

I have never seen a Shakespeare play set in the eighties, but throwing Macbeth into the ‘greed is good’ corporate landscape of Thatcher’s London just works. Mary and I had intense talks about how our Lady Macbeth would fit in this setting. She is a complex character, so there were many options to play here – we decided not to use witchcraft as her impetus, but her love for her family. We decided that she lived a secluded life in the country away from family and friends and that Macbeth was away at work in the city, leaving her very isolated.

Playing the role of Lady Macbeth is almost like ticking off an item on my bucket list; I’ve had people tell me how much they would love to play her and congratulate me for bagging such a fabulous role, as though it’s a badge of honour. And I do feel honoured to be taking on the great Lady Macbeth. I hope the audience will have some compassion for her. Someone said to me, ‘I hate Lady Macbeth’, which is a strong, but not unwarranted, feeling. Yet I hope the audience will have an understanding of her actions, even if they don’t agree with them. An actress friend told me the “Scottish Play” should be known as The Macbeths because they are so integral to each other, and I agree. They really are a team, and it’s only when one starts to venture off on their own that the fracture develops that ultimately leads to their demise. It really is a fatal love story.

I believe this production offers more of an understanding of Macbeth’s story, as Mary’s interpretation is incredibly detailed. Lots of people think of it as a dry, bloody play – or a bloody dry play. Our production is an intense corporate thriller decked with opulence and run through with aggression. It’s about identity, sudden betrayal and even more sudden violence. I hope audiences will find this production as exhilarating to watch as we find it to perform. Audiences may not catch all the production’s layers on their first viewing, so I hope they’ll want to come back to look again and see more. Basically: I hope they think our Macbeth is just a bloody good play.