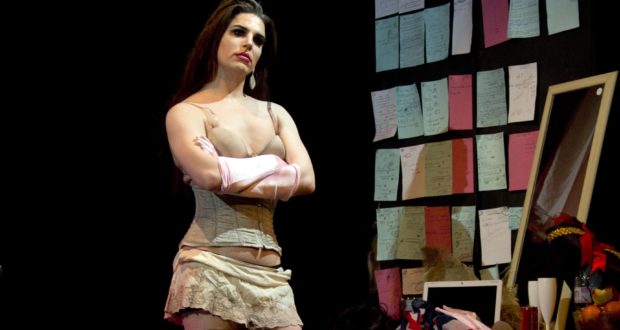 Drag theatre is an increasingly broad church and here it is used to serious political effect at Omnibus Theatre’s 96 Festival of queer theatre, which celebrates the iconic 1996 Pride party on nearby Clapham Common.  The drag, for fans, delivers. Lip syncing, pop covers, gay culture references (including a welcome nod to Kenneth Williams), fan dances and wounded glamour are all present and correct.  Everything looks divine too. Sam Wilde and Elizabeth Harper’s set design, in a reconfigured Omnibus auditorium, is totally on point. Costumes from Molly Beth Morossa have seductive wit and lighting designer Jack Weir knows exactly how to use colour. Brilliantly, he doesn’t resist glitter ball camp when it is called for either.

All of this supports opera director Orla (Siobhan O’Kelly) in telling her story about a work trip to Tehran during the Green uprising of 2010 and, in a twin plot, the opening of a Soho club with best friend and drag artist, Mark (Nathan Kiley). The politics is upfront and unapologetic. We know within minutes that Orla is an angry queer feminist. Writer and director Sarah Chew makes it clear, though, that anger at the Iranian ‘bad guys’ is too simplistic a view.  Her protagonist is angry at the system, the world, the limitations of art, cultural practice and herself too.  This climaxes in a call to action that is inclusive, direct and fierce.

Lipstick does, to be fair, take a while to get us there. Billed as equal parts theatre and drag cabaret, it works best when the two gel seamlessly.  Too often, the drag feels a mere add-on to a dense and fact-filled one woman show. Early on, Orla is determined to tell us about the background to her trip in Wikipedia-level detail. Attempts to add theatricality to, essentially, a travelogue about the airport, hotel and fellow passengers feel underdeveloped and repetitive. Frankly, it is a long slow start. There is a lot of plot and, perhaps unnecessarily, two over arching framing devices. We are at the opening night of Mark and Orla’s club mid-argument and at a politically correct girls’ school lecture before we get anywhere near the heart of the story.

Poor Mark has an abusive relationship to deal with too, although all we hear of it is a series of increasingly graphic voicemail messages. The fact that this strand only has time to skate over implied sexual exploitation close to home feels a slight political mis-step too. All of these might be moot points, because the show isn’t necessarily following the traditional rules of storytelling. Style over content is putting it too strongly, but there is a tension at work. How much clarity do we need from scripted monologues anyway? How can they compete with the freedom and decadence of cabaret? Where does that balance lie?

As the action progresses, themes and ideas rely less on narration and benefit from being explored more in the moment. A cinematic party scene where blue and turquoise lighting bounces from a knockout sequin dress says everything we need about Tehran’s women behind closed doors. The British Ambassador to Iran has his pomposity wordlessly pricked with an inspired costume choice.  We see Orla’s body change in ‘acceptable’ Iranian dress, as the set’s catwalk briefly becomes a Mosque. Most importantly, we care about a young victim of the regime because we see her. We bear witness.

Doing much of the emotional heavy lifting, Siobhan O’Kelly is highly engaging, with precisely the right fire behind her eyes. As both Mark and a handful of supporting characters, Nathan Kiley does the rest with skill and a wry knowingness that is totally in keeping with the drag spirit. Sarah Chew and her team use that spirit to create some beautifully arresting moments, while taking an unrepentant queer feminist stance on world events. By doing both in a form that takes risks and asks questions, Lipstick is a worthy headliner for the Omnibus’s 96 Festival. Those responsible should take pride in it and you should go and experience it.