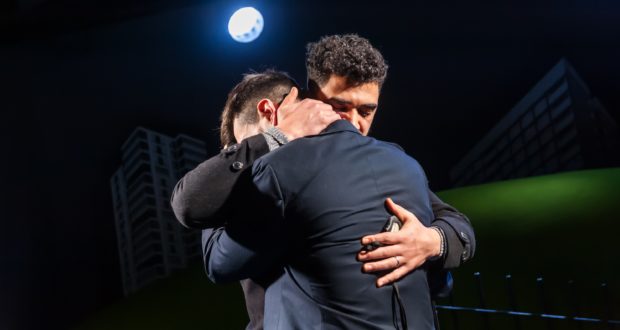 There Is A Field, Theatre503 – Review

There Is A Field, Theatre503 – Review

Mark (Sam Frenchum) is from a typical East End family, working class to the core.&nbsp; Except Mark has gone off the rails with too many drugs, and has been kicked out of the family home.&nbsp; After the death of his dad his mum (Sarah Finigan) wants him home, because after all, family is everything and it’s his duty to be at the front of the funeral; people have to see him there to show the family strength. &nbsp;The problem is that he’s found religion and is now going by the name Abdullah, preaching his hard-line version of Islam to&hellip;

It might not be perfect, it might not be the best thing you will see this year, but a play from a working-class voice should be cherished and enjoyed.

Mark (Sam Frenchum) is from a typical East End family, working class to the core.  Except Mark has gone off the rails with too many drugs, and has been kicked out of the family home.  After the death of his dad his mum (Sarah Finigan) wants him home, because after all, family is everything and it’s his duty to be at the front of the funeral; people have to see him there to show the family strength.  The problem is that he’s found religion and is now going by the name Abdullah, preaching his hard-line version of Islam to anyone who will listen. But while Abdullah might preach love, understanding and forgiveness, these don’t extend as far as his family, whom he sees as the cause of all the woes of his former life, and worse, as infidels, unclean and unworthy of his new God. So instead Abdullah buries himself deeper into Islam. Not the Islam his friend Saleh (Archie Backhouse) believes in, the one that would allow him to attend a Christian funeral, and to him to help his friends, but the Islam of extremists and holy war.

So that’s the basic concept of There Is A Field.  Family, religion, death.  The three things that are at the heart of so much of life, and certainly East End life; you might beat the living daylights out of someone, but it’s OK, because you can repent in church on Sunday and all will be forgiven. It’s a strong foundation for a play, and at times it hits its target dead centre.  Writer Martin Askew is one of those rare things, a working class playwright who is clearly wearing his heart on his sleeve; elements of the play are surely drawn from his own life, one that has seen him imprisoned and coming to writing late through the wonderful Synergy Theatre Project.  He writes with an authenticity that is sometimes lacking in the theatre, creating dialogue that sounds real from his characters, and no more so than from bullyboy / dodgy geezer brother Tony (Fabrizio Santino) who expresses the anger and jealousy of being son number two.  It’s also written with plenty enough humour to mitigate the darkness that envelops the characters as Abdullah slowly becomes more and more radicalized.

The problem is that having created this central theme and some interesting characters, Askew then goes and over complicates it with too many little additional threads.  The outcome of which is that the play at times waivers and flounders, struggling to get across its main message across.  It’s a classic example of where less might have been more.

There is much discussion about the lack of working class voices within theatre, and that opportunities often flow from the privilege of wealth.  So it is a pleasure to see plays such as There is A Field, which might not be the greatest thing you will witness this year, but it might well be the most worthwhile