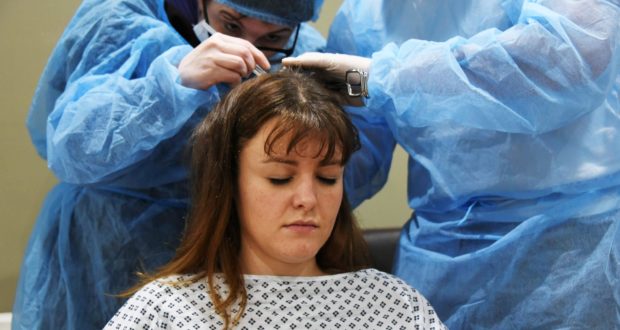 Primal Theatre state that their aim is to create pieces that reflect human experience at their core.&nbsp;Whether having a hedgehog alive in your head meets that aim is something that we could debate all evening. And the reason why a hedgehog is alive in Molly's head is at the heart of Headhog, as she first tries to come to terms with this strange fact, asking 'how did it get there?' Then slowly as she bonds with it, her question changes to 'why is it there?' It's a quirky and novel idea, falling just the right side of absurd to&hellip;

A play that is just absurd enough to hold some appeal, but is in need of further reworking to make it more than just a novelty piece

Primal Theatre state that their aim is to create pieces that reflect human experience at their core. Whether having a hedgehog alive in your head meets that aim is something that we could debate all evening. And the reason why a hedgehog is alive in Molly’s head is at the heart of Headhog, as she first tries to come to terms with this strange fact, asking ‘how did it get there?’ Then slowly as she bonds with it, her question changes to ‘why is it there?’ It’s a quirky and novel idea, falling just the right side of absurd to keep your interest for this hour-long piece.

But there are two problems that stop this play making the jump from interesting to engrossing. Firstly, the question of what was the play trying to say. Abstract is fun, abstract is what so much fringe theatre is built around, giving the audience something to discuss in the pub afterwards. But abstract still needs to have some direction, hints of its purpose. Much like Molly asking how did it get there, why is it there, Headhog left me asking what was it actually trying to say. Was it about the decline in the hedgehog population caused by our lifestyles and farming practices? Was it more philosophical, the hedgehog as a metaphor for something deeper? Or was it simply what it was, a play about a girl with a hedgehog living inside her head? There just wasn’t quite enough in Tom Jensen’s writing to hint at his intentions, and so not quite enough to spark a good after-show debate on its meaning.

The second issue that needs addressing, if Headhog plans to grow into something more, is that it is just so damn difficult to feel any empathy for Molly. For the play to really work, that is a basic requirement. But due to some stilted acting and her need to explode in anger at any opportunity there’s a distinct lack of feeling for Molly, and certainly no empathy. Given that Molly is played by Natasha Zierhofer, who also acts as producer and founder of Primal Theatre, it might be a difficult thing to suggest, but perhaps another actor could bring something else to the role that would allow that empathy to flourish?

But if you can get past both the question of what it means, and a central character who is the weak link, there is much to enjoy. Headhog could grow and mature, much like the hedgehog in Molly’s head. There are some genuinely laugh out loud moments, brought about by the pure absurdness of it all. The laughter brings a lightness that counters Molly’s (unnecessary?) outbursts. They also hint at potential in a script that feels like a work in progress. The brain surgery, with its essential “sucky” machine, complete with sound effects, is a thing of wonderful stupidity, made even better when the patient’s father is asked to assist – doesn’t that happen in real life all the time! And above all else, a scene seriously underused, the three-way debate between Molly, a philosopher (Sheila McCabe) and an ecologist (Mike Kelson), as they ask first how it got there, and then why is it there at all. It takes the absurdity up a notch and again demonstrates where this play could go, as they circle around each other, both literally and metaphorically.

Headhog is a weird little creature; it has flaws and they do grate, but if you can get over whether it really means anything then you can enjoy this as an hour of absurd drama that seems to fit in nicely with the quirky nature of the theatre in which it is performing.