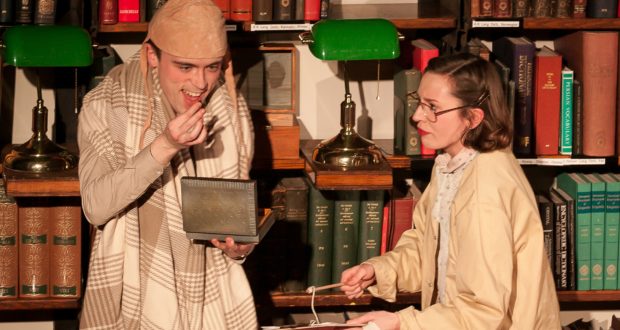 As a Londoner born and bred, a book lover and aspiring writer to boot, I am ashamed to admit I'd never heard of the London Library. Tucked away in St James's Square, just behind Piccadilly, it houses over one million books. First editions, antiquities and periodicals stretching back five centuries; a treasure trove of history, knowledge and wisdom. How could I not have known about this place? Another startling fact: Bram Stoker joined the library in 1890 and did his research for Dracula here. So what better venue to stage this perennial favourite? Pre-show, I took advantage of a&hellip;

A masterful retelling of a classic story, in the most unique and special surroundings.

As a Londoner born and bred, a book lover and aspiring writer to boot, I am ashamed to admit I’d never heard of the London Library. Tucked away in St James’s Square, just behind Piccadilly, it houses over one million books. First editions, antiquities and periodicals stretching back five centuries; a treasure trove of history, knowledge and wisdom. How could I not have known about this place? Another startling fact: Bram Stoker joined the library in 1890 and did his research for Dracula here. So what better venue to stage this perennial favourite?

Pre-show, I took advantage of a guided tour, hosted by genial Development Director Philip Spedding, who hit patrons with even more fascinating facts. The library was founded in 1841 by writer Thomas Carlisle; previous members include Charles Dickens, Rudyard Kipling and Agatha Christie. Current President Sir Tim Rice was preceded by Alfred Lord Tennyson and T.S. Eliot among others. The library continues to nurture talented writers such as Daisy Goodwin, who did most of her research for TV series Victoria here. Perhaps most surprising of all, it operates as a conventional lending library. All but the rarest and most valuable books are available on loan. Walking around the book stacks was inspiring; metal grilled floors gave a bird’s eye view both up and down the building. The indexing system was a joy to behold. Under ‘D’ we had death, dentistry and demonisation, while ‘F’ gave us flagellation, flags and flax. Under ‘I’ was insanity, insurance and insects: brilliant!

The play was staged in the main reading room on the first floor. A beautifully designed space was lined with books from floor to ceiling; metal stairways led to gantries on both sides. Two projectors began to warm up as I took my seat, the atmosphere was building nicely. For those emerging from a monastery, here’s a quick rundown on Bram Stoker’s masterpiece:-

Dracula tells the story of a lawyer, Jonathan Harker (Brad Lambert), who arrives in Transylvania to assist Count Dracula in the purchase of property. During his stay, Harker finds his client has a sinister side and soon becomes trapped in Dracula’s castle. Back in England, a Russian ship is wrecked on the Yorkshire coast with no sign of the crew; a young woman, Lucy Westenra dies as Renfield, an inmate at a local asylum speaks of the arrival of his ‘Master’. Harker eventually escapes and returns to wife Mina (Sophie Greenham). However, their nightmare continues as Mina experiences violent dreams and Jonathan has irrevocably changed, following his return.

It was a superbly tight, well drilled production featuring two very accomplished actors. They showed great versatility and doubled in various roles to great effect. The visuals were absolutely stunning, as sharp images bounced around the room, heightening the tension with an eerie soundtrack to match. My only gripe in an otherwise flawless production was the sightlines. Obviously the room wasn’t designed for theatre, but I missed most of Act I because of my vantage point. The venue tried to address the issue with graduated seating (e.g. high bar stools in the back row), but I could only properly see when action moved onto the stairs or gantry. Nevertheless, it was a thoroughly enjoyable evening; just spending time in a place where history’s greatest writers have worked was an absolute treat. All they have to do now is sort out the sightlines!