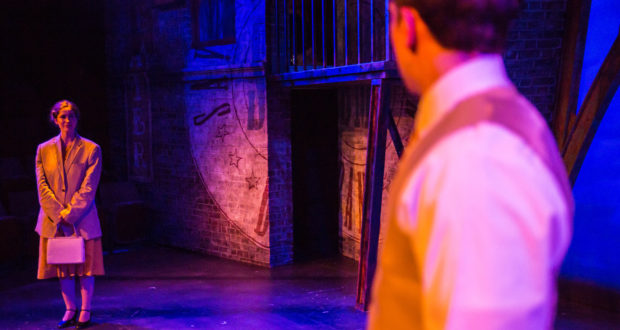 Guys and Dolls, The Mill at Sonning – Review

Cons: The show’s politics are in serious need of an update.
Guys and Dolls, The Mill at Sonning – Review

Pros: Great cast, slick choreography and catchy songs. Cons: The show’s politics are in serious need of an update. Perhaps the classic American musical from the fifties, Guys and Dolls is nevertheless one of those shows that doesn’t come around that often, so I was surprised but pleased to see it pop up only a few years after Chichester Festival Theatre production’s successful run in the West End and on tour. A quick summary for the uninitiated: the titular guys are Nathan, a small-time gangster who runs the ‘oldest established permanent floating crap game in New York’, and jet-setting&hellip;

A fun show with very high production values, although its datedness does risk it becoming a bit of a museum piece.

Perhaps the classic American musical from the fifties, Guys and Dolls is nevertheless one of those shows that doesn’t come around that often, so I was surprised but pleased to see it pop up only a few years after Chichester Festival Theatre production’s successful run in the West End and on tour.

A quick summary for the uninitiated: the titular guys are Nathan, a small-time gangster who runs the ‘oldest established permanent floating crap game in New York’, and jet-setting high roller Sky; the dolls are strait-laced Sergeant Sarah of the Save a Soul Mission, and ditzy nightclub performer Adelaide. Adelaide is Nathan’s long-suffering fiancée (fourteen years and counting) who is desperate to get married, while Nathan is mostly desperate to conceal his illegal dealings from Adelaide. But Nathan also needs money, and has therefore made a bet with Sky that the latter won’t be able to convince Sarah to go to Havana with him. And Sarah is, of course, much more interested in getting Sky to give up his sinful ways than in going on a date with him. Let the games begin.

As might be expected from a show that premiered in 1950, the politics can be a bit iffy, and it’s a strange experience to sit in an auditorium in 2018 listening to characters cheerfully sing about how women need to be married in order to stay physically healthy, or about training your husband to be more sophisticated through domestic violence. (Then again, The King and I is still going strong in the West End as we speak, so stranger things have happened.) I’m not suggesting we shelve Guys and Dolls along with most of the other classic musicals of the age, but surely a creative team could get a bit more, well, creative with it instead of plonking it on stage with all its problems unscrutinised.

That being said, director and choreographer Joseph Pitcher has done said plonking with a lot of pizzazz. A fairly serious attempt seems to have been made at cramming a West End level production into a 200-seat auditorium with a very small stage, and the result is spectacular but also surprisingly intimate. The set and costumes (design by Diego Pitarch and Natalie Titchener respectively) are beautifully detailed, the choreography on Havana and Crapshooters Ballet is very slick indeed, and somehow they also managed to squeeze a five-person live band somewhere backstage.

The fourteen-strong cast are great and it’s the ensemble pieces that really make the show, so much so that some of the individual numbers feel slightly underpowered by comparison. Nevertheless, Natalie Hope’s Adelaide is the shiniest star of the evening, Oliver Jacobson delivers ‘nicely’ on Sit Down, You’re Rockin’ the Boat and Johnathan Tweedie’s fantastic facial expressions are also very deserving of an individual shoutout.

If you’ve come this far in the review and are now thinking, ‘this sounds great, but what’s this theatre that I’ve never heard of or read about on Everything Theatre before’, that’s probably because The Mill at Sonning is, as the name suggests, in Sonning rather than in London. (For all you geography losers like myself, that’s just outside Reading.) The concept too is unlike anything you’ll find in London: you buy a ticket to a show, and your ticket price includes a two course dinner. Also, it’s in a refurbished watermill. The Mill was recently named most welcoming theatre in the UK, and it’s not difficult to see why: the staff are lovely, the food is great and the venue is charming. It really is a much more relaxing way of enjoying an evening at the theatre than the usual ‘dash from the tube station while shoving a Pret sandwich in your mouth’ routine. Although it does of course require you to get on a train and then take a taxi to the theatre, so it’s a bit more pricey as well.

All that being said, my guest and I had a very enjoyable evening. Despite its issues, Guys and Dolls is a fun show with some very catchy songs, and it’s great to see an incarnation of it with such high production values in such a special venue. A lovely evening out for theatre fans who are looking for something different.