Home » Competitions » WIN A PAIR OF TICKETS TO SEE THE HILARIOUS THE PLAY THAT GOES WRONG! 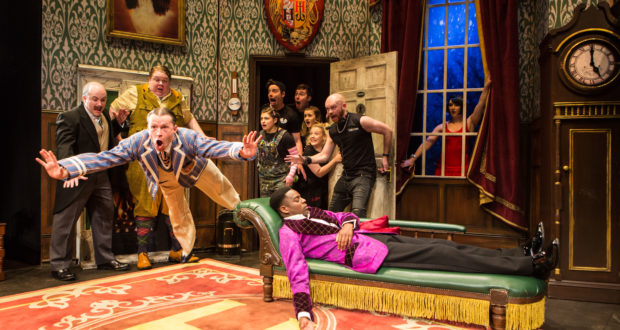 Everything Theatre competitions are like buses, sometimes one is queued up behind the last one.  So, hot on the exhaust fumes of our fantastic Chicago competition, we’re now equally as excited to offer you a chance to win a pair of tickets to The Play That Goes Wrong.  Can you believe it’s been around for four years now? So if it’s been on your “must see” list, now is your chance to finally see what all the excitement is about.

As ever, entry is as simple as clicking on our Twitter link below, retweeting it so all your friends can see it too, and then following us if you aren’t already doing so. Now what could possibly go wrong there?  Just make sure you do it by 7pm on 17 November, it would be so so wrong to be late now wouldn’t it.

COMP ALERT: Hot on the heels of our last one, here’s another. For a chance to win 2 tkts to @playgoeswrong jst follow us & retweet this. Extra entry if you tell us what went wrong for you on a theatre trip #comp https://t.co/Wh2VoqsbJl

If you aren’t the lucky winner, why not check out for tickets here

THE PLAY THAT GOES WRONG IS 4 YEARS OLD!

The Cornley Polytechnic Drama Society are putting on a 1920s murder mystery, but as the title suggests, everything that can go wrong… does! The accident-prone thespians battle against all odds to make it through to their final curtain call, with hilarious consequences!

Given 5 stars from The Daily Mail, called a ‘Gut-busting hit’ by the New York Times and with celebrity endorsements from the likes of Ant and Dec as the ‘funniest show we’ve seen! If you can get a ticket go’, what are you waiting for?

Now blundering through its fifth catastrophic year, THE PLAY THAT GOES WRONG is guaranteed to leave you aching with laughter!

A MASTERPIECE OF MALFUNCTION – THE TIMES

I FEARED I WAS GOING TO HYPERVENTILATE – THE DAILY MAIL

The PLAY THAT GOES WRONG

Tickets are valid for all performances on Tuesdays, Wednesdays and Sunday until the 15th December 2018. Not to be used in conjunction with any other offer and no alternative offered.

Competition closes at 4pm on Saturday 17 November. Winner will be selected at random from all eligible entries, and will be notified no more than 3 days after the closing date. The winner has 3 days to accept the prize and provide contact details, otherwise a new winner will be chosen at random.  All additional expenses are the responsibility of the prize winner. Editor’s decision is final.

IT’S AS THOUGH THE MOUSETRAP HAS BEEN TAKEN OVER BY MONTY PYTHON– WHATSONSTAGE.COM

A MASTERPIECE OF MALFUNCTION – THE TIMES

I FEARED I WAS GOING TO HYPERVENTILATE – THE DAILY MAIL

A JOYOUS SHOW BUILDS TO A DELIRIOUS CLIMAX – FINANCIAL TIMES

A COMPLETE TONIC – THE EVENING STANDARD

I WAS REDUCED TO TEARS OF JOY – INDEPENDENT ON SUNDAY

A TECHNICAL TRIUMPH – TIME OUT

Previous: Still No Idea – Royal Court Theatre, Jerwood Theatre Upstairs – Review
Next: Modern Anxiety Gets the Spotlight in Made in China’s ‘Super Duper Close Up’