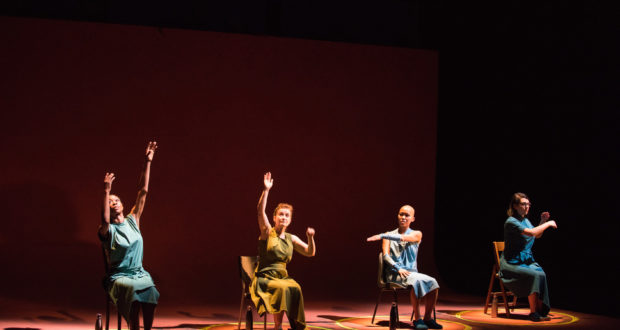 Pros: Let’s talk about an intriguing piece of abstract art

Let’s talk about something bold but inaccessible

User Rating: Be the first one !
Let’s talk about conceptual theatre. This is not a play in any conventional sense, jettisoning character and plot in favour of something almost entirely different.

Let’s talk about four women sitting in a row on chairs within vivid yellow circles as though hemmed in by the whirls of an enormous highlighter pen.

Let’s talk about reading and repeating lines that all begin “Let’s talk about” and range from the comprehensible (the opening “Let’s talk about who has the privilege to speak first”) to lists of ideas and phenomena that read like the transcript of a particularly unfocused brainstorming session. None of these concepts is actually discussed or interrogated.

Let’s talk about how the lines are projected on the back wall of a quite cool minimalist set (by Ben Pacey) which looks a bit like a skateboard ramp with some potted ferns peeping over the top. Let’s talk about how useful the projection is when the performers all speak at once and become incomprehensible, which happens frequently.

Let’s talk about one recurring section, which is the closest the show gets to presenting a story: a woman has plumbing issues and ponders the significance of dishwashers.

Let’s talk about the almost total lack of interaction between the performers, bar a few glances and some business with water bottles when they swap seats.

Let’s talk about the final segment, in which scripts are set aside and the performers endlessly repeat four mimes. One looks like flicking water from fingers (symbolising annoyance? Finality?), another is a sort of side-toside shiver (settling into something?). There are arms stretched up then dropped down (collapse?) and a rising movement with flat palms, which mostly reminded me of airplanes taking off.

Let’s talk about the excellent music (by Owen Crouch) accompanying this final part. It starts sparse, with what might be the ticking of a clock, and builds and builds in a crescendo of instrumentation and purpose. Let’s talk about how ironic it is that the most abstract of art forms provides the most emotionally engaging element of this show.

Let’s talk about how this is a professionally produced show but one that’s all intellect. There’s no humour and very little humanity. Perhaps it should be submitted for the Turner Prize?

Let’s talk about something else now.