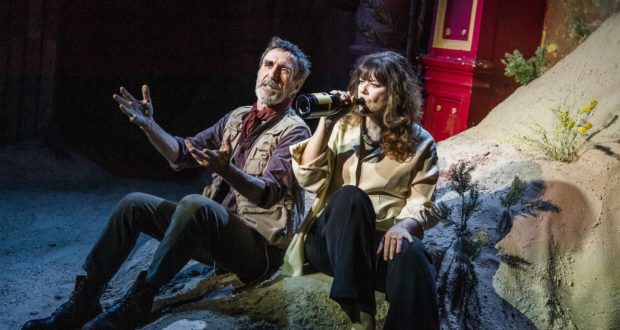 Pros: An excellent cast of familiar faces give the play a much needed boost.

Pros: An excellent cast of familiar faces give the play a much needed boost. Cons: A beautiful venue in serious need of refurbishment and a script requiring similar tender loving care. I feel quietly reassured when a Grade II listed building is purchased and restored to its original function. The Coronet in Notting Hill Gate is one such example. Designed by legendary theatre architect W.G.R. Sprague it opened with royal patronage in 1898 and hosted a variety of productions until 1923, when it was converted into a cinema. Predictably, the venue changed hands over the years and was once&hellip;

Although engaging, the script never quite grips the audience in the way it should, but the cast bring the story home with relative ease.

User Rating: Be the first one !
I feel quietly reassured when a Grade II listed building is purchased and restored to its original function. The Coronet in Notting Hill Gate is one such example. Designed by legendary theatre architect W.G.R. Sprague it opened with royal patronage in 1898 and hosted a variety of productions until 1923, when it was converted into a cinema. Predictably, the venue changed hands over the years and was once threatened with demolition and conversion into a church. However, in 2014, theatre company The Print Room took up residence and the Coronet once again became a theatre.

The interior looked dilapidated and in serious need of repair, on the dimly lit stairway leading down to the auditorium. Walls were stripped bare and I hoped this was the sign of refurbishment. However, the majesty and atmosphere of the venue was unmistakable. A half-moon shaped stage was filled with sand at opposite ends, with a movable platform in the centre. A large screen stretched across the back and was later used to great effect.

Love Lies Bleeding tells the story of Alex (Joe McGann) a terminally ill artist reflecting on his life. He is visited one last time by ex-wife Toinette (Josie Lawrence), who crosses swords with current wife Lia (Clara Indrani) and son Sean (Jack Wilkinson). The play raises some thought provoking life issues; familiar themes are explored as everyone seems to know what’s best but no one has the strength to make a decision. The agony of saying goodbye to someone we love, and a the desire to delay the inevitable are well represented in the story.

However, the script misses a number of tricks that might have strengthened an otherwise solidly written play. Logical sequences in the storyline are missing and the audience are left to surmise how (and why) the story gets to a certain point. The flashbacks are used too sparingly, particularly exchanges between Toinette and Alex which would have provided greater context. The focus alights far too often on Alex and his wives, but very little time is spent on the relationship between Alex and his son Sean, which gives the story a lopsided feel. The running time of approximately 80 minutes isn’t particularly helpful either, reducing the characters to a series of short cameos which doesn’t provide the depth they so richly deserve.

The play nevertheless hangs together reasonably well and benefits from an excellent cast. But it raises too many questions and leaves the audience to fill in the blanks, which may be obvious, but there’s no need to keep people guessing. That said it remains a solid if unspectacular play with sufficient dramatic content to hold the attention.