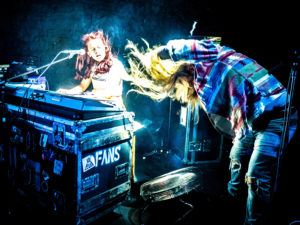 Have you ever queued for hours so you can be at the front of a gig?

Have you ever ended a gig with a few too many bruises from the moshpit?

Have you ever been deaf for three days after a rather loud gig?

Have you ever screamed so loud you lost your voice the next day?

Do you agree that theatre should be enjoyed at

If you can answer yes to any of these, then well done, you are eligible to enter our latest competition for a pair of tickets to any of the London performances of Fans, the new half show/half gig about, well, being a music fan.

In fact, we’re so nice, we’ve actually got two pairs to give away, so that’s two lucky winners.  All you need to do is release your inner fan and scream so loud your lungs hurt. Or you could just enter via Twitter and Facebook, full instructions below.  Don’t hang around though, the competition will end 7pm, Sunday 28 October.

For a chance to win a pair of tkts (we have 2 pairs) to Fans at either @CW_Theatre or @TheatreN16 jst r/t and follow. If you're feeling daring tell us your biggest fandom moment @thesixtwenty #FansTour Full details at https://t.co/rLo10jLL9M

And if you want to join in the fun, why not tell us your most memorable experience at a gig, or the wildest thing you’ve ever done as a fan.  We’ve started you off with our confession on twitter, now we want to hear yours.

Presented by The Six Twenty in association with Live Theatre presents

Are you a super-fan? Done anything extreme to see your favourite band? Has music, or a gig changed your life?

Your story could feature in the show, or in a special listening booth of music fan confessions that will be travelling with the show on its national tour.

You can upload your story via the online Fans Club www.bit.ly/FansClubOnline, come along to a show where confessions will be gathered before and after the performance or join the Fans team in-person at an informal Fans Club event and share your story with fellow music lovers. Details can be found at www.thesixtwenty.com.

Fans is a lively gig theatre show; a powerful mix of new writing and raucous live music. Full of emotion, humour and musical pulse, it’s a show for anyone who’s ever loved music. Featuring four musicians/theatre makers from the North East.

Inspired by real music fan confessions, collected from across the UK, and crammed full of classic hits and original songs, ranging from Green Day to Madonna, Beyoncé to the Beatles, Massive Attack to The Smiths. It’s a heart-warming tribute to music lovers that should be enjoyed at maximum volume.

Fans is written by Nina Berry (The Terminal Velocity of Snowflakes, Live Theatre) in collaboration with The Six Twenty, a Live Theatre Associate Company from 2017.

“I am delighted that following its run in 2016, Fans is returning this Autumn and taking to Live Theatre’s main stage. It’s brilliant to be back at Live Theatre and I’m really looking forward to taking the show to venues in Doncaster, London and Sunderland. It’s a real privilege to be working with the cast and creative team again – with the addition of new cast member Alex Tahnée – to develop the show further and I’m incredibly excited for the tour to commence.”

In 2016, The Six Twenty received the Bridging the Gap award to develop Fans; playing to packed audiences across the North East at venues including ARC (Stockton) and Northern Stage (Newcastle). This time, The Six Twenty are teaming up with Live Theatre to reimagine Fans for a new audience in 2018. The show premieres at Live Theatre in October before the band takes to the road for a UK tour to venues including Canada Water Theatre & Theatre N16 (London), CAST (Doncaster) and The Peacock (Sunderland).

“Fans is a fantastic, current and engaging show by The Six Twenty, who are a really exciting company coming out of the North East. We were delighted to work with The Six Twenty as a Live Theatre Associate company in 2017, and to commission them to present Fans in the region and tour to other parts of the UK.”

Fans tours to London this November and is at Canada Water Theatre on Friday 2 November and at Theatre N16 on 7 & 8 November. The show is suitable for ages 13+, and is 1 hour and 15minutes (no interval). So, it’s the perfect night out for music fans of all ages. Tickets are £10-£14; £8-£6 concessions. For more information or to book tickets visit www.thesixtwenty.com.

Fans is supported using public funding from Arts Council England, Live Theatre and the Sunday for Sammy Trust and was originally created as part of the Bridging the Gap initiative; an initiative designed to aid the creation of new theatre work within the North East region.

Prize is valid for a pair of tickets to Fans, at either  Canada Water Theatre (2 Nov) or Theatre N16 (7/8 Nov).  It cannot be used in conjunction with any other offer and no alternative prize will be offered.

Winners will be selected at random from all eligible entries, and will be notified no more than 3 days after the closing date. The winner has 3 days to accept the prize and provide contact details, otherwise a new winner will be chosen at random.  All additional expenses are the responsibility of the prize winner. Editor’s decision is final.