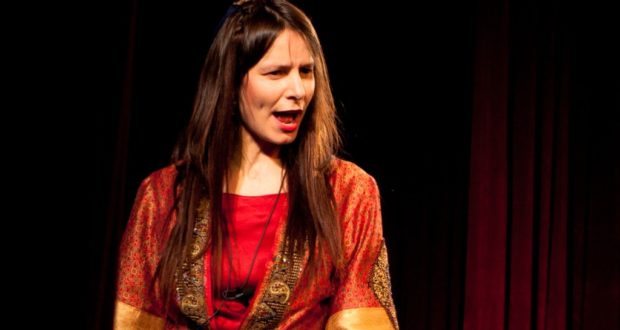 Evenings with the Crick Crack Club begin with a call and response: the word ‘CRICK’ prompts the audience to inform their storyteller that they are open to listening, and therefore you are required to reply emphatically ‘CRACK’. Thus begins a slightly barmy, but beautiful evening of storytelling. Buddha Babies, with story teller Xanthe Gresham Knight, is a complex and hilarious exploration of what it means to be ‘childless’, with whatever connotations that might carry for a woman, negative or positive.

In the first half of the evening, Knight weaves personal stories with much larger ones – mythological journeys of epic proportions. Against the backdrop of home videos depicting the storyteller’s childhood, including trips to the beach and faces familiar during Knight’s growing-up, we have a rich telling of the Greek myth of Demeter, who descended to the fiery underworld to save her daughter, Persephone, from a life bound to the god Hades. The personal and the epic are delicately poised and accompanied by lovely visuals and an array of curious instruments; an experience of motherhood is communicated with fervour.

If you’re a fan of The Moth, the storytelling event that took the world by storm in 1997, you’ll probably enjoy an evening with the Crick Crack Club. Knight is the perfect person to take you on a mad journey through the tumultuous experience of a woman as she ages. Knight navigates the politically charged conversations around womanhood: of wanting children, or not wanting them, of being unable to have them, of menopause, of the reclaiming of the C word, of the unimportance of defining gender. She does it all with a vivacity and energy that makes the time seem to pass in the blink of an eye.

The second part of the night, in part, involves making sweets from an ancient recipe. These were delicious (ahem…) vulva-shaped things made from dates, spices, and a lot of honey. Knight mesmerisingly makes the little treats as she explains, in the least ‘preachy’ or self-righteous way, the connection between the Earth’s elements and its people. It’s a bit of a mammoth topic, and one that could divide an audience, but Knight delivers everything with such sparkle and dynamism that you cannot help but be swept along.

Knight is an exciting allegorist. Even when the script went a little off-piste, it was a joy to watch her comic rhetorical meander back to the tangent. I really could watch Xanthe Gresham Knight speak from now on and for the rest of time. The Crick Crack Club have a reputation for using ancient storytelling techniques to excite a modern audience, and this evening demonstrated exactly that. The room was exceptionally responsive from the get-go: audience participation can be a little daunting, but it is impossible to feel uncomfortable when the whole room has got your back.

It seems a bit against the spirit of the performance to set the parameters we usually apply to theatre, by applying a star rating. Still, rules are rules, and this was an excellent evening. The more important thing to state is the simple fact that there is something (especially in the sometimes-gloomy social moment we’re in) nourishing and energising about watching a fearless raconteur tell their story. What an absolute delight.

Writer and Performer: Xanthe Gresham Knight
Booking Until: One night only, but two more Crick Crack Club events are planned at the Soho Theatre this Winter.