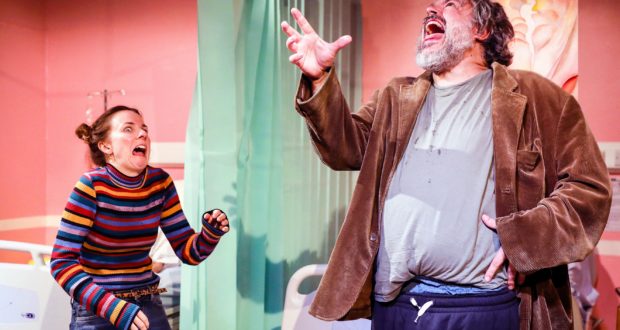 A Funny Thing Happened On The Way To The Gynecologic Oncology Unit by Halley Feiffer. Finborough Theatre, London.

A Funny Thing Happened on the Way to the Gynecologic Oncology Unit …, Finborough Theatre – Review

Cons: It’s not a title that slips of the tongue is it!  And if the title offends, then so will the play.
A Funny Thing Happened on the Way to the Gynecologic Oncology Unit …, Finborough Theatre – Review

Pros:&nbsp;A great comic turn from Cariad Lloyd, bouncing (sometimes literally) off an equally fine Rob Crouch. Cons:&nbsp;It’s not a title that slips of the tongue is it!&nbsp; And if the title offends, then so will the play. So let’s start by getting that title out of the way.&nbsp; I mean really, why would any sane person call a play A funny Thing Happened On The Way To The Gynecologic Oncology Unit At Memorial Sloan-Kettering Cancer Center Of New York? Perhaps as a Godsend to a reviewer: drop it in a couple of times, hit your word count easily, stay&hellip;

Come to see the wonderful Cariad Lloyd; stay for a charming, funny and thoughtful play.

User Rating: Be the first one !
So let’s start by getting that title out of the way.  I mean really, why would any sane person call a play A funny Thing Happened On The Way To The Gynecologic Oncology Unit At Memorial Sloan-Kettering Cancer Center Of New York? Perhaps as a Godsend to a reviewer: drop it in a couple of times, hit your word count easily, stay in the newly refurbished Finborough Arms pub for another drink after the show? No of course not (!) – for now, I’ll refer to it as A Funny Thing Happened.

It’s a beast of a title, telling you exactly what to expect, no holds barred: a dark piece of comedy on what can sometimes be a taboo topic, although cancer isn’t even mentioned much.  Much like the nearly constantly sleeping figures of mothers Geena and Marcie (Cara Chase and Kristian Milward), cancer is ever present on the stage, silent, laying in the background waiting to pounce.

The child-parent relationship is clearly one that fascinates playwright Halley Feiffer. Her previous work, I’m Gonna Prey For You So Hard, also performed at the Finborough, explored the fractiousness between a father and a daughter, and A Funny Thing Happened further examines these complicated familial relationships; the search for some kind of approval, and for reasons why things have become the way they are. In the hospital setting, Karla (Cariad Lloyd) seeks a bond with her cancer-stricken mother, Marcie, whilst doting son Don (Rob Crouch) visits his ill mother Geena, but is really seeking answers as to why his adopted son hasn’t spoken to him for two years.

The opening scene gives little away of the parent-child theme, but is a delight to witness. Cariad Lloyd (maybe best known as a comic on shows such as QI and 8 Out Of Ten Cats) and Crouch spend it berating each other from opposite sides of a hospital curtain as both sit with their sleeping mothers. The facial acting of Crouch is a thing of beauty as we watch him react to hearing Lloyd read out loud as she practices her new stand-up routine. After all, how would you react if you heard someone talk about dreaming of being raped by their vibrator, all whilst you are sitting with your dying mother? The comic timing of the pair feels natural, and clearly well-rehearsed given that the two actors are unable to see each other for whole sections of the scene.

After the manic opening things settle as the pair bond over their ill mothers: the one thing they have in common, the one thing that has brought them here. They slowly seek answers to why their relationships have been so strained, each offering answers to the other as they reveal their secrets and truths, all the time with their mothers in the background.

As you’d expect with such a to-the-point title, the writing is blunt, there are no taboos. Some people may find it offensive, others refreshing, the attitude being ‘laugh in the face of adversity’.  If you are in the latter camp, A funny Thing Happened On The Way To The Gynecologic Oncology Unit At Memorial Sloan-Kettering Cancer Center Of New York City could well be for you.  It is, after all, a chance to see some fine actors up close and personal in a play that is as well written as you could hope for.