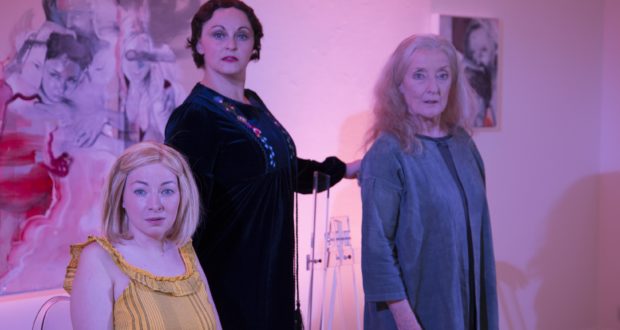 Cons: The first monologue is longer and less engaging than the other two.
Picasso’s Women, Gallery Different – Review

Pros: The unique art gallery setting. Cons: The first monologue is longer and less engaging than the other two. Prolific painter, ardent lover, selfish life companion, Picasso seemed to choose increasingly younger partners as he aged. In these times of toxic masculinity his profile as a womaniser would mark him as a repulsive old man, absorbed in his own oversized ego, his behaviour deemed unacceptable and his persona slated publicly. A century ago however, his temperament was an attractive feature and his volatile fancies were justified by his tormented creative genius. Keeping track of Picasso's amorous exploits is nearly as&hellip;

In the suggestive surroundings of the Gallery Different, three of Pablo Picasso's most influential muses offer an intimate portrayal of the man they loved and hated.

Prolific painter, ardent lover, selfish life companion, Picasso seemed to choose increasingly younger partners as he aged. In these times of toxic masculinity his profile as a womaniser would mark him as a repulsive old man, absorbed in his own oversized ego, his behaviour deemed unacceptable and his persona slated publicly. A century ago however, his temperament was an attractive feature and his volatile fancies were justified by his tormented creative genius.

Keeping track of Picasso’s amorous exploits is nearly as hard as remembering the hundreds of famous artworks in his repertoire, but many of these women had a direct influence on his artistic production. Often they started out as models, then becoming muses and mistresses, ultimately inspiring dozens and dozens of his portraits. Like a parasitic plant he latched onto his women, both possessive and oblivious to their wellbeing. Draining all their vital lymph, he kept them keen with empty promises, before discarding them in favour of his next caprice. Unsurprisingly, two of these women – both mothers to some of his children – committed suicide after Picasso’s death.

One of them, Marie-Thérèse Walter, features in Brian McAvera’s collection of monologues Picasso’s Women, her naivety and delusion gracefully embodied by Kirsten Moore. She met the painter when she was merely 17-years old and gave birth to his first daughter, Maya. Their relationship lasted about a decade, before he replaced her with the artist Dora Maar.

The main reason why the pair never married is that they couldn’t; Picasso’s first wife, Russian ballet dancer Olga Khokhlova categorically refused to divorce him and effectively remained his legal partner until her death in 1955. Her character is boldly portrayed in the suggestive atmosphere of the Gallery Different in Fitzrovia by Colette Redgrave. Her disdain for an unfaithful husband and burning thirst for revenge are visually echoed in the vivid hues of red that animate the paintings on the surrounding walls. This is the most enthralling and passionate of the three acts.

Her appearance on stage is preceded by Fernande Olivier’s tragic opening monologue, as enacted by Judith Paris. The only one who knew Picasso before he became famous, Olivier inspired his transition between the blue and the rose period. Her speech is steeped with memories of domestic abuse and mistreatment.

Addressing the painter directly, the three women draw a portrait of the man behind his public image, offering an insight that is rarely considered by admirers of his work. An underlying imbalance between the time dedicated to each woman and the overly melodramatic tone of Fernande Olivier clashes with the verve and sarcasm displayed by Olga Khokhlova and Marie-Thérèse Walter, with the first piece being too stretched and almost tedious. Because of this slow start and an overall subdued dramaturgy, I think this play misses out in establishing a full connection with its audience.

Nevertheless, the play is perfectly complimented by the gallery setting, with a fascinating selection of artworks that come alive whilst we hear about the infamous deeds of the father of Cubism. Seeing the true colours beneath the surface of one of the greatest masters of modern art is such a rare opportunity that I’d advice anyone to enjoy this play if they can.