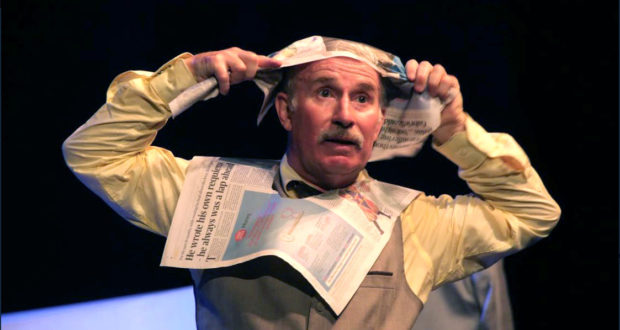 Pros: A rare opportunity to see some of Italy’s most iconic theatre works.

Cons: The language barrier is only partially compensated by the presence of subtitles.
Italian Theatre Festival, Print Room at The Coronet – Review

Pros: A rare opportunity to see some of Italy's most iconic theatre works. Cons: The language barrier is only partially compensated by the presence of subtitles. Promoted by the Italian Cultural Institute and curated by Monica Capuani, the first edition of the Italian Theatre Festival was hosted at The Coronet, a long-standing arts institution in the heart of Notting Hill. Spread over two days, the event included four plays by some of Italy's most renowned theatre-makers, as well as a talk about the intimate relationship between theatre and literature. The opening title Hanno Tutti Ragione (Everyone Is Right) is&hellip;

An ambitious first attempt at finding a middle ground between Italian and British theatre.

Promoted by the Italian Cultural Institute and curated by Monica Capuani, the first edition of the Italian Theatre Festival was hosted at The Coronet, a long-standing arts institution in the heart of Notting Hill. Spread over two days, the event included four plays by some of Italy’s most renowned theatre-makers, as well as a talk about the intimate relationship between theatre and literature.

The opening title Hanno Tutti Ragione (Everyone Is Right) is an adaptation of the homonymous book written by Academy Award winner Paolo Sorrentino. Directed and performed by Iaia Forte, this breeches role revolves around the intimate thoughts of melodic pop singer Tony Pagoda, whilst he goes through the most prestigious concerts of his career. Praising the consumption of booze and cocaine, as well as a ruthless objectification of women, Pagoda represents the most disturbing traits of Italian machismo. He’s depicted sexually abusing his female assistant, luring prostitutes and constantly referring to his wife in derogatory terms.

The redemption of the anti-hero arrives very late in the play, with the singer recognising his own trivial and undeserving attitude. However, it is the warm approval coming from the audience – with their continued laughter and final standing ovation – that left a bitter aftertaste, as it felt like an endorsement of the abhorrent behaviour only subtly condemned by the playwright.

After a two-hour break, during which no subsidiary events were planned, the evening resumed with Novecento by Alessandro Baricco, one of Italy’s finest living artists, renowned for the musicality of his writing. Directed by Gabriele Vacis and performed by Eugenio Allegri – the original team that first staged the play in 1994 – Novecento is the story of the pianist Danny Boodman T.D. Lemon Novecento, as narrated by one of his friends and colleagues. This is the text that inspired Giuseppe Tornatore’s film The Legend of 1900, starring Tim Roth.

Allegri’s debatable choice to portray his character as if he were a drunkard or madman butchered the intrinsic poetic rhythm of the piece: his shouting, slurring and sharply cutting the sentences midway affecting the harmonious flow of the lines. Fortunately, this was visually counterbalanced by a fascinating game of lights projected on the backdrop white curtain which, grabbed and fluttered by the actor, created some mesmerising effects.

The second day of the festival kicked off with the late Nobel Prize winner Dario Fo’s most emblematic piece Mistero Buffo, directed by Eugenio Allegri and brought to life by the impressive Matthias Martelli. Celebrating the medieval tradition of the court jesters, Fo wrote this controversial piece around the contradictions of the Catholic faith, which demands its worshippers to blindly believe some rationally inexplicable ‘mysteries’ – like the miracles carried out by Jesus Christ.

Martelli was the true star of this festival, oozing energy and relentlessly covering every inch of the stage, whilst embodying one of the most challenging parts ever written for theatre. Wearing plain black clothes against a black background, with almost static lighting, the actor is compelled to bring this piece to life with the mere use of a multifaceted range of vocal, linguistic and physical skills. Martelli absolutely nailed it.

The play was followed by the talk Writing for Literature and Theatre, hosted in The Coronet’s candlelit underground bar. French writer Gilles Aufray, Nigerian poet Ben Okri and Italian playwright Emanuele Trevi discussed the affinity between literature and theatre, in view of the upcoming opening at the Print Room of The Outsider, Okri’s adaptation for the stage of Albert Camus’s novel L’Étranger.

One of the most interesting points to emerge was the actor’s relevance as a mediator between the two artforms – being not only in charge of embodying the narrative voice, but also becoming the “master of movement” as soon as the story is transposed in front of an audience.

The discussion also highlighted the importance of respecting the spirit rather than the letter of a written work, whose survival depends on its adjustment to a specific socio-political, historical and geographical setting. As an example of wrongdoing, the panel criticised Samuel Beckett’s testamentary ostracism, with the author establishing so many clauses to the staging of his works as to keep them frozen in time, causing their inevitable death. According to the speakers, every theatre production is, somehow, an adaptation, as the director and designer’s choices denote a sort of preliminary interpretation.

The gala was concluded by another big name of the Italian stage, Marcello Magni, with the presentation of the work in progress But Why? Ma Perché? – a jewel-box of vignettes involving a wise fool from Persia called Nasrudin. Some had educational value and some were more absurdist; these amusing anecdotes focus on the protagonist’s direct experience with walls, and the physical separation between what he’s familiar with and what he can only guess. Written by Gilles Aufray and accompanied at the guitar by his talented son Oliver Barwell-Aufray, But Why? Ma Perché? nods to the medieval style of Boccaccio’s masterpiece The Decameron, one of the foundation books which contributed to establishing Italian as a language. This was the only piece to be delivered in English and received a lukewarm reaction from the audience, despite Magni’s elegant performance.

During his introductory speech, the director of the Italian Cultural Institute, Marco Delogu, promised a second edition of the event in May 2019, although the line-up is yet to be announced.