A brief history: The Finborough Theatre was founded in 1980, above the pub from which it took its name. The pub itself originating from 1868.  It soon forged its reputation as a location for new writing, and during the 1980s hosted numerous names that have gone on to become big in their own fields, from actors to writers.

Why we love it: A versatile venue that can quickly be reconfigured for any type of staging. One visit you may be seated on four sides of the stage, the next time the performance may be down the middle of two rows of an audience. But it’s not just the fun of wondering how the seating is going to be laid out that should draw you back here time and again, rather it’s the pure range of what they put on. Because The Finborough Theatre is both a place for new writings as well as rediscovering plays of days gone by, often putting on revivals not seen in London for decades.

What’s the seating like?  Whilst the layout may change for each new production, the seating doesn’t. Small rows of benches that can quickly be relocated as required. So yes, as always with benches, it’s not the height of luxury.

Stage and visibility: As we’ve said, you never quite know where the stage will be. But given the size of the venue, what you do know is you are always going to be no more than an arm’s length from the stage. When the stage is in the round, it’s often only two rows dee, so you know your view is going to be as good as it can get. The deepest we’ve ever experienced is only four rows!

Things you should know: Probably the most distinctive looking venue you will see as you approach from Earl’s Court Station.  But being right on a busy road, you can sometimes get traffic sound inside the venue.

Accessibility info: The pub itself is easily accessible, but then we have stairs, 23 of them, leading then to a level access theatre space that does offer plenty of room. Given it’s a 150 year old pub, there isn’t much that can be done about those stairs, although it’s a friendly venue that will offer as much assistance as possible.

Guide and hearing dogs are welcome, and they will even arrange audio and large print versions of their programmes where possible and with notice.

Does it have a bar or do food? The downstairs pub is fully aware of theatre goers and will ensure your drink is served in a plastic glass if you ask. There is no menu but they do get pizza’s delivered

What have we seen there lately?  Just click here to see the shows we’ve reviewed at Finborough Theatre

How to get there: It’s a five minute walk from Earl’s Court Station (Piccadilly or District lines) and about the same from West Brompton (District and National Rail).   Buses also travel past the venue, with direct buses coming from Earl’s Court, West Brompton, Fulham Road and Chelsea, World’s End. 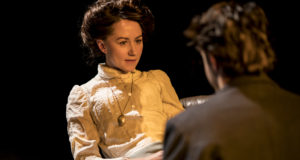