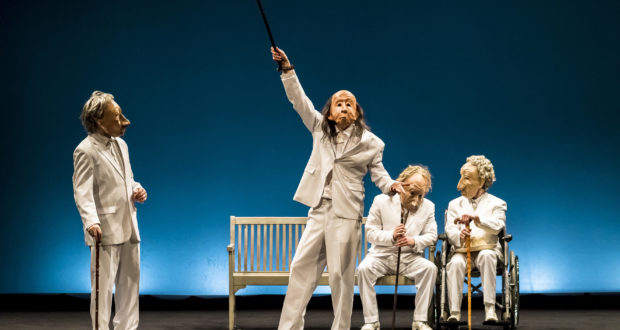 Interview: Hajo Schüler on ‘Infinita’ at the Edinburgh Festival Fringe

Since their founding over two decades ago at the Folkwang University of the Arts in Essen, Germany, Familie Flöz has enchanted the world with their unique combination of masks and movement. The company’s work relies on the audiences’ willingness to step into the performance using their imagination and sense of humour, performing in an unspoken language that is nevertheless universally understood.

This August, the troupe is at the Edinburgh Festival Fringe with Infinita, a moving story that follows four friends from their birth to their funerals. Co-founder, artistic director and mask-maker Hajo Schüler spoke with Marianna Meloni in Edinburgh about the company’s creative process and how they give life to the stunning characters that populate their shows.

First presented in 2006, Infinita is one of the longest running shows in the Familie Flöz repertoire. How long did it take you to develop it?
The development of Infinita has a special story because we were supposed to open a new venue in Berlin with it, which was still in construction when we made the piece. As this took longer than planned, we had to postpone the opening night two or three times, despite the piece being ready.

Roughly we work on a show for three and a half months. We start always from zero and there’s no written script. There’s a theme – sometimes it’s just an image, sometimes it’s a bit of a story or a character. In the case of Infinita, we wanted to do something about the first and the last moment in life.

Why do you think your performances are so easy to relate to? What makes them so universal, despite the absence of spoken word and the masks’ technically static facial expressions?
Not consciously, but audiences are specialists in body language. Deep inside, they have a big understanding of the body. In our work we don’t use text and we try to condense every scene, every moment into a pure thing of movement and body language. The same happens with the mask. Because it’s rigid, it provokes the imagination, as we want to see something that moves in it. Since the mask doesn’t move, something else has to move – and this is the imagination of the audience. In a way, everybody sees their own story in what we do, because it’s not made explicit by the text. That’s why it is also more intimate.

What other elements – together with the performers’ physicality – do you think are vital to the success of the Familie Flöz format?
Definitely the sound and the music are important, because otherwise it would be silent and that would be a problem. In Infinita, for example, we use a lot of live music; there are a piano and a cello played live and this is melting together with the movement. The music is not written, which doesn’t mean that it is improvised, but that there’s a lot of action and reaction.

Then, of course, it’s the lighting, because with bad lighting the mask doesn’t have a chance to get alive. What the light is trying to do is to help the people to forget that there is a mask. Our intention is not to show the mask but to make it disappear. And then I think the humour is vital. The fact that people laugh is an important contribution to the performance, it’s a sort of movement that comes from the audience, which brings us closer. It’s necessary that people move, and laughing is a good way to step into it.

How important is the message in your shows? Do you develop each of them around a well-defined theme, or do you focus more on the comedic effect of each sequence and then tie them up into a performance?
In nearly every piece that we did we discovered the message after 70 or 80 shows, so it’s something that is also decided by the audience. When the show is new, we propose a structure, the dramaturgy, the scenes and the characters, but I think the message is often something that we don’t understand at the beginning. It’s definitely the characters and the scenes that we build around.

We don’t want people to get out of the show with a message; it is much more about the quality of how audiences are looking at things and how the communication is between us and the people. The quality of being together is an important part for us; we want to make people breathe with the characters and with the stories. One thing that all the plays [we’ve done] have in common, though, is the failure of the characters. They are always simple characters that don’t succeed.

Is there a reason for it?
We are influenced by clowns, in a way, so it is very much about failure and about how close comedy and tragedy are.

Is the mask born from the story or is the story born from the mask? In other words, have you ever conceived a mask and thought, ‘I want to create a story around this character,’ or is it normally the other way around?
It’s both, as it is a process. For every play we develop masks, but we don’t start with the masks. In the first period of the rehearsal, we work without mask; we talk a lot and we create text, the situation, the conflicts and so on. We call this ‘the material’ and this is the inspiration for the masks – like a draft for the characters, the conflicts and the consolations within one scene. With this input I create the masks. Then, when the masks come into rehearsal, they take over – also the part of the writer. Once the mask is made it cannot be changed, so the job of the actor is to change and to understand how to bring this mask to life. We try to make the mask stronger. From this moment the mask decides, provokes and brings out the story. This story is not necessarily something that somebody had thought about before, [so] there are a lot of surprises. Once it’s there, the mask becomes the boss, but the inspiration for the mask is the draft of the character.

Tell us more about the creative process. Where do you find inspiration for your masks?
In the case of Infinita, for example, it came at a time when some of the cast became parents and also their parents died. When your first child is born it is an important change in life and you think, ‘This child will live longer than me.’ Your own perspective of death, in a way, changes and you start experiencing time in another way. The same when your parents die.

How long does it take you to make a mask?
It varies from four days to three weeks. Sometimes you know exactly what this mask should play, what conflicts the mask should have and which part in the hierarchy of characters it is supposed to take. But, when you haven’t got a very clear idea of what the mask is supposed to do, then to build it is quite tricky. Sometimes [it’s] not the first attempt that [works] and I have to do a second one or a third one.

Do you draft them on paper first?
No, the process from two-dimension to tri-dimension is a very tricky one and I’m not very good at it. I’m better with my hands and I work directly with the clay.

The company has also run a Summer Academy for the last 12 years. Can you tell us what it is about and what requisites a candidate must have to take part?
We always like to teach and we always go to theatre schools and academies and, one day, we had this idea to teach together as a company. This is how the Summer Academy was born. We wanted to give an insight of how we work together and this is difficult to do alone. There are 30 students that come to Italy from all over the world for two weeks. Everybody who’s got a theatre education can apply, but there are also dancers, architects, puppeteers, directors . . . so it’s quite open. Actually, everybody can apply just by writing a letter and telling us what their intentions are and what they’re looking for. Then we build a group. This includes from very young people who just finished school, to a 70-year old woman with a lot of directing experience, for example, and this combination of people with very different experiences is quite challenging and nice.

Your latest production, Dr Nest, just launched in March 2018 – are you already cooking up something new for the future?
Yes, we do! How do you know? [laughs] When we get back from Edinburgh, we have a little break to recover and then we start rehearsing a play called Himmelerde, which means ‘heaven and earth’ in German. This is a special project because we’re going to do it together with a small orchestra from Austria and two singers, and it’s about the German romantic songs from the 19th Century: Schumann, Schubert, Mahler . . .

This is the first time that we [have worked] with two singers and with an orchestra, and the opening night will be in the Opera in Berlin this January.

Infinita is currently playing at the Pleasance Grand as part of the Edinburgh Festival Fringe through 27 August.