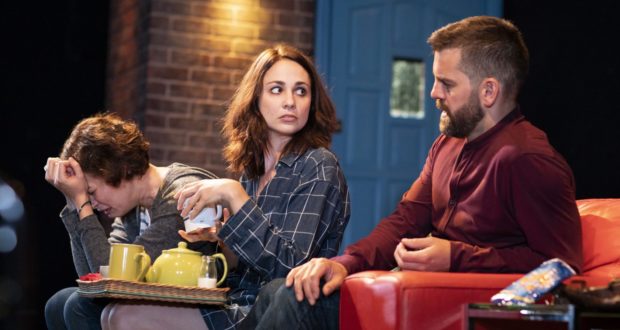 The One, Soho Theatre – review

A powerful, witty and at times shocking dissection of a relationship.

The couple are Jo and Harry, up all night because Jo’s sister has gone into labour. While they wait for news they drink, they argue, they fight, and they have sex to pass the time. Jo – in a compelling performance from Tuppence Middleton – is a flighty, feisty twentysomething whose favourite game is to stir things up. Harry, Jo’s English lecturer turned long-term lover (a powerful yet vulnerable John Hopkins), is by turns entranced and exasperated by her capricious volatility and her relentless lying.

They’re interrupted by Kerry (Julia Sandiford), Harry’s former girlfriend, seeking solace after a row with her current partner. Jo delights in winding her up, teasing and needling, offering acerbic barbs in place of sympathy. Harry loves Jo – she’s charming, witty and playful –  but her callous tactlessness infuriates him. “He has a disturbingly high sex drive,” she informs Kerry, adding, tellingly: “He confuses honesty with decency.” Honesty is never Jo’s strong suit.

The One tackles the difficult issue of rape, with Jo turning the tables on allegations of non-consensual sex and insisting that she wants Harry to rape her. How far can she push him before he fights back? How is Harry to choose between the two women, and who should he defend? Power shifts back and forth in an instant, as both protagonists take and lose the upper hand.

Vicky Jones’ sparkling script is both shocking and witty, with enough humour to carry the audience despite the serious subject matter. Her forensic examination of a sour yet binding relationship explores the darker side of sexual relationships, even if Jo’s machiavellian machinations are sometimes too tortuous to ring true.

Steve Marmion’s taut, inspired direction keeps the show on the rails. The passage of time over the course of the long night is depicted by the actors winding the clock forward between scenes; and the copious consumption of alcohol is signified by the emptying of wine bottles into the wings. This is a hugely welcome revival of one of Soho Theatre’s homegrown plays.