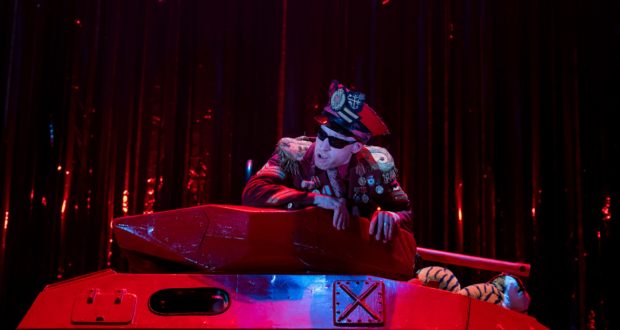 Pros: British clichés and drama tropes are nailed, aided by a vast number of fun props and different music styles, from rap to community brass band tunes. The cast is a deliberate cross-section of modern Britain, with some stand-out performances.

Cons: At times it feels like the weirdness factor is cranked up just for a reaction, with little relevance to the plot. A seemingly relentless war section labours its writer’s and director’s point. Pity, Royal Court – Review

Pros: British clichés and drama tropes are nailed, aided by a vast number of fun props and different music styles, from rap to community brass band tunes. The cast is a deliberate cross-section of modern Britain, with some stand-out performances. Cons: At times it feels like the weirdness factor is cranked up just for a reaction, with little relevance to the plot. A seemingly relentless war section labours its writer’s and director’s point. It must be a nightmare to clear the stage after each performance of the utterly surreal Pity. There’s a childlike and cartoonish brilliance in Chloe Lamford´s set&hellip;

One of the most distinctive plays this year, Pity is a typical Royal Court boundary-pusher that will divide audience opinion with its surrealism and occasional smugness. Prepare for high-octane tragicomedy fuelled by ice cream.

User Rating: Be the first one !
It must be a nightmare to clear the stage after each performance of the utterly surreal Pity. There’s a childlike and cartoonish brilliance in Chloe Lamford´s set design and the props used to represent your average town square seen through a comedy lens. Lightning is represented by a neon sign, the sky can be rolled up, and toy dogs are a comedy device. Yet this is also a dark piece, taking you through one extraordinary day in the life of a man who has come to watch the world go by; before long, fluffy clouds have been replaced by explosions and chaos. Throughout, sound designer Pete Malkin adds the perfect mix of music, from rap to Dire Straits, and even the Fulham Brass Band.

Characters have functional names, like ‘Person’ (a captivating Abraham Popoola) or ‘Daughter’ (Sofia di Martino) and, save for those two main roles, the rest of the cast juggle the other characters between them, including a candle enthusiast, a Prime Minister, and a special forces captain. There’s a chance for everyone to shine, but I particularly enjoyed watching Francesca Mills and Paul G Raymond. At times, Pity feels like a sketch show or a parade of memes, but the overarching story – dizzying as it may be – knits everything together, including even the ice cream stand you can visit before taking your seat, and the tombola ticket you are given.

The rapid descent from quiet market square to war zone sounds improbable, yet our increasingly odd news headlines suggest the surreal can quickly come become real. Anti-Semitism has reared its ugly head, we’re careering towards the horror show that is Brexit, and the world is only a few tweets away from nuclear war under President Trump. Reality is skewed in this fiction market town (or, as Person points out, a town now without a market), and the supporting actors rise to the extra challenges of a surreal script, pushed to its furthest limits by director Sam Pritchard. How they manage not to corpse as Magimix boxes start raining from the sky or people deliver lines as their own ghosts, I’ll never know.

Unfortunately, Pity loses its way as anarchy truly descends from the half-way mark onwards; I wasn’t the only one shuffling in my seat when jokes about coffee shops and a song about sandwich fillings gave way to tanks and hostages. There are still light moments in the doom and gloom, including a spirited rendition of The Floral Dance, but a sniper saying ‘the reason I did it [shot someone] was no reason’, or a warlord talking of ‘understanding the necessity of a tank’ seemed like redundant lines. These were just two examples of the playwright’s over-reliance on deliberately clunky exposition, which would be fine in small amounts but here just lengthens the piece overall and feels slightly patronising. If you buy or browse the play text, you’ll see playwright Rory Mullarkey doesn’t use full stops, either. This makes it a really open text for a creative team to stage, but I couldn’t help wondering if punctuation was an early casualty of all those explosions.

The least inventive part of the war section is deliberately knowing, with a neon sign lowered to spell out ‘Atrocities!’ as two sides fight for dominance again and again with slapstick enthusiasm and deafening rounds of gunfire. I grasped the point here – as war goes on, people forget what they are fighting for; mindless killing becomes the only goal – but on and on it goes. Things pick up towards the end of Pity when the excellent Postwoman (Siobhán McSweeney) appears. She could almost have her own spin-off sequel.

This play will incite debate about human nature, self-destruction and how we are always teetering on the edge of chaos, but it will also incite the usual hush-hush Royal Court audience debate: how much of it did you actually understand, and how much did you enjoy? Call me naïve, but I’d have preferred more of the eccentric humour and bizarre ghost sequences, instead of the bleak selfishness.

Previous: The Nightingale And The Rose and other tales, Barons Court Theatre – Review
Next: Sounds and Sorcery, The Vaults – Review