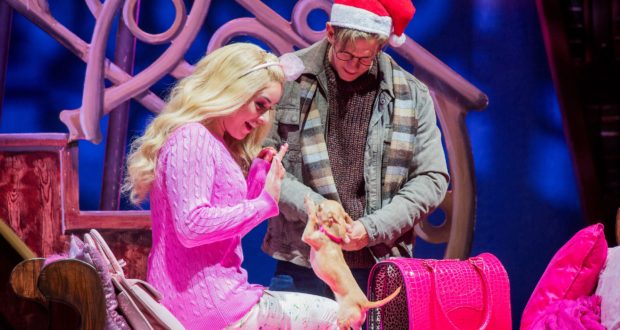 Cons: If you don’t go in for musical theatre or fluffy things, this will probably give you an allergic reaction.
Legally Blonde – The Musical, New Wimbledon Theatre – Review

Pros: A cracking cast, catchy songs and a very impressive skipping rope routine. Also, dogs on stage. Cons: If you don’t go in for musical theatre or fluffy things, this will probably give you an allergic reaction. It’s a testament to the iconic status of Legally Blonde that, despite having never seen either the 2001 film or its subsequent musical adaptation before, I was already aware of most of its highlights. Bend and snap? Check. Scented CV? Check. Now, having finally clapped eyes on the national tour production of Legally Blonde – the Musical, which is currently in residence&hellip;

A fun, fabulous feelgood show that will take you waaaaay over your daily recommended dose of sugar.

User Rating: 0.58 ( 3 votes)
It’s a testament to the iconic status of Legally Blonde that, despite having never seen either the 2001 film or its subsequent musical adaptation before, I was already aware of most of its highlights. Bend and snap? Check. Scented CV? Check. Now, having finally clapped eyes on the national tour production of Legally Blonde – the Musical, which is currently in residence at the New Wimbledon Theatre, I can absolutely see what all the fuss is about.

Peppy fashion student and sorority sister Elle is heartbroken when her boyfriend Warner breaks up with her so that he’s free to pursue a woman who suits his ambitious plans for the future. In an attempt to prove that she can be the serious partner he is after, Elle decides to leave behind her fun-loving life in California to study law at Harvard (where Warner also ‘happens’ to go). Supported by her unlucky-in-love friend Paulette, teaching assistant Emmett and her sorority squad, Elle sets out to show the doubters – including the shark-like criminal law teacher Professor Callahan and Warner’s new girlfriend Vivienne – she’s more than just ‘Legally Blonde’.

This musical adaptation packs the film’s feelgood story with upbeat, catchy songs and matching dance routines, basically making it the cultural equivalent of injecting your eyeballs with candy floss. It is musical theatre squared, in pink. If you are not a fan of the genre, don’t even think of going anywhere near this. For everyone else, however, Legally Blonde is an infectiously fun evening out and musical theatre aficionados will appreciate the way the show lovingly pokes fun at some of the weirder genre conventions. People interrupt each other’s heartfelt solos. Elle’s sorority squad shows up in spirit form to comment on the action, because “this is a tragedy, and you need a Greek chorus”.

The cast are very competently led by Lucie Jones as Elle – the former Eurovision contestant can obviously bash out a more than decent tune, but she also brings good comic timing and a winning cheekiness to the role. Rita Simons’ Paulette pairs a big voice with a charming awkwardness, while Helen Petrovna impresses as Brooke, the jump rope-loving fitness coach who simultaneously skips and sings her heart out, seemingly without breaking a sweat. She very deservedly bags one of the biggest rounds of applause of the evening. Predictably, however, the show is stolen by its two four-legged cast members (Elle’s and Paulette’s dogs, Bruiser and Rufus) who draw many a collective ‘awww’ from the audience.

It’s not plain sailing all the way. The sorority girls mostly talk in an annoying (and annoyingly cliched), high-pitched twang. The quality of the choreography is uneven. I get that to an American audience, Paulette’s view of Ireland as a country full of leprechauns and hot ginger men might be hilarious, but on this side of the pond it frankly just feels weird. Nevertheless, these are minor glitches in an otherwise fun, fabulous feelgood show. In summary: oh my god you guys, you should, like, totally see this.