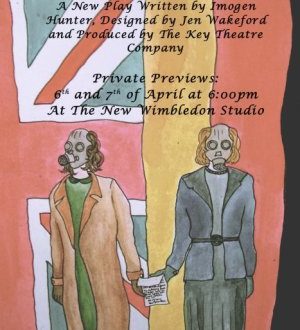 Cons: The drama is diluted with too many less relevant events.
The Secret Letters of Gertie and Hen, New Wimbledon Studio – Review

Pros: The cast works really hard to make the play work. Cons: The drama is diluted with too many less relevant events. Written and directed by Imogen Hunter, The Secret Letters of Gertie and Hen is the story of two ten-year-old pen pals, whose correspondence comes to a halt when the threat of a second World War starts looming over Europe. Gertie (Isabella Hayward) is from Berlin and Hen (Christie Silvester) in based in London. They visit one another during the summer and, in the rest of the year, we see them staying up late to write each other&hellip;

Over two-and-a-half hours long, this new play is still very much work in progress and would benefit from a drastic pruning.

User Rating: 3.45 ( 2 votes)
Written and directed by Imogen Hunter, The Secret Letters of Gertie and Hen is the story of two ten-year-old pen pals, whose correspondence comes to a halt when the threat of a second World War starts looming over Europe. Gertie (Isabella Hayward) is from Berlin and Hen (Christie Silvester) in based in London. They visit one another during the summer and, in the rest of the year, we see them staying up late to write each other long letters.

It’s the year 1939, the outbreak of WWII is imminent, and their parents consider receiving mail from an enemy country too dangerous, hence they decide to prevent the best friends from keeping in touch. Despite the ban, the girls keep writing the letters, in the hope to be able to send them once the war is over.

Many of these messages are delivered directly to the audience by one of the two girls, who strides centre-stage, accompanied by a loud noise of heels, reads the note, and hastily trots away again across the auditorium. This dynamic soon becomes wearing, as many of these unnecessary movements could have been solved by temporarily placing the actors around the stage, with a wiser use of lighting to direct the audience’s attention.

For the first hour, the narrative is easy to follow, relying on events that we’re sadly familiar with. Snippets from a Hitler’s rally are broadcast on the wireless and despite remaining untranslated from German, their content is imaginable. Gertie’s parents are against the Nazi ideology, whilst their eldest daughter shows a disturbing admiration for the regime.

Back to Hen’s house, we assist to the famous radio broadcast where King George VI announces to the country the beginning of the war. It’s a painful moment, still alive in the memory of our older generations, but the family’s reaction is unnecessarily melodramatic and based on a sheer lack of insight. A more accurate research would have provided the playwright with the right elements for a dramatic development that, in its current shape, is flimsy and devoid of emotional depth.

One of the major issues in this production is the plausibility of the events. Towards the end of the war – which has been described month after month by the girls – Hen and her mother host a German fugitive in their home and teach him how to knit. I’m not sure this would have happened in real life, but if it did happen, it must have been for some extraordinary circumstances which I would have loved to see unfolding on stage. Instead, the episode is almost disconnected from the rest of the play and detrimental to a much-needed economy of time.

There are also some evident discrepancies in the costumes, which affect the ability of the play to establish a credible setting. Some of the young girls are wearing thick black tights, which didn’t exist at the time, and the hemline of some of the skirts should have been at least 5 inches longer, and definitely below the knee.

Two more things bothered me about this piece. One being the use of a foreign accent (German, in this case) which is deemed an unnecessary feature and conventionally dropped in favour of a clearer enunciation. The other, far more important, is the choice to write a play about children and cast adults to play their roles, which is one of the main reasons why so many youths feel estranged from a platform that, unsurprisingly, doesn’t quite represent them.

Finally, the absence of a director who thinks independently from the playwright and approaches the script with fresh eyes is a burden that weights down the performance. This despite a solid cast who work hard for two-and-a-half hours to maintain the relentless pace of this over-expanded and watered-down drama.