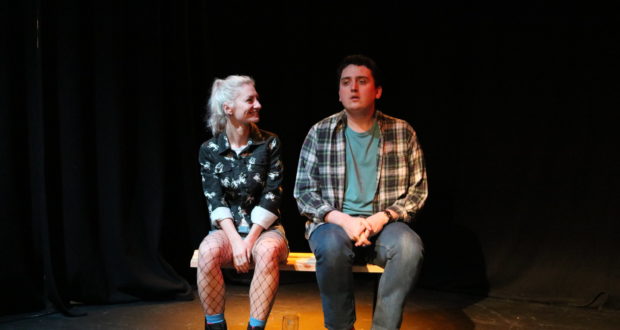 Credit: The After School Club

Pros: Genuine laugh out loud moments created by a mix of great writing and perfect casting.

Cons: The imbalance between the light fluffy romance and the darker moments of the story.
Sophie, Ben and Other Problems, Tabard Theatre – Review

Pros: Genuine laugh out loud moments created by a mix of great writing and perfect casting. Cons: The imbalance between the light fluffy romance and the darker moments of the story. Just a stone’s throw from Turnham Green tube station (provided you turn the right way when you exit!) the Tabard Theatre is not exactly your normal above the pub fringe venue. In fact, it’s probably one of the most attractive looking entrances I’ve had the delight to walk through. Inside it ticks all the boxes; spacious, comfy and not so large that it feels empty if not packed&hellip;

The After School Club showcase serious potential that should be nurtured and encouraged in this funny and big hearted play about love.

Just a stone’s throw from Turnham Green tube station (provided you turn the right way when you exit!) the Tabard Theatre is not exactly your normal above the pub fringe venue. In fact, it’s probably one of the most attractive looking entrances I’ve had the delight to walk through. Inside it ticks all the boxes; spacious, comfy and not so large that it feels empty if not packed out.

But as good as a theatre might look and feel, it’s what’s on stage that really matters. Thankfully, Sophie, Ben and Other Problems is a show that does ample justice to its surroundings. From the minds of The After School Club – a relatively fresh face on the theatre scene – this production showed why such venues are a godsend to up and coming outfits, allowing them to develop their art in safe surroundings.

At just an hour long Sophie, Ben and Other Problems is short and sweet but big in heart. From the opening jaunty music that introduces young lovestruck couple Sophie and Ben, through to the incredibly moving final scene, there is little waste in that hour. In that short time we witness Sophie and Ben tell us all about themselves and each other, their families and their dreams. Performers Dylan Morris and Conor Burke reveal the good and the bad within their characters, and they do so with bags of talent.

It’s sweet without becoming sickly, saved by the multitude of laugh out loud moments that are born from a great script and some stellar acting. Interspersed between these descriptions of their lives and their relationship, we are treated to flashbacks of the important moments in their blossoming romance; first conversation, first kiss, first sexual experience (one of the shorter scenes much to Sophie’s displeasure). Put it all together and it’s a perfect insight into a young couple so in love with each other that it’s surely near on impossible not to smile as they finish each others’ sentences, or tease one another over their bad habits.

But as the hour moves on a darkness descends. Ben’s anxieties and worries come to life, brought on by the death of his father. As funny and touching as the play is up to this point, it’s this darkness that gives us the actual story. It’s a sharp turn, possibly too sharp. Because whilst it develops the plot and gives it the depth it needs, the speed of the change is maybe a little too fast. A more gradual introduction into this bleakness might make this even better.

I’d also raise a question mark over the opening scenes being portrayed as a research project examining ‘modern day millennium relationships’. Sophie and Ben tell the audience they are only doing this for their friend James’ PhD. Except it just doesn’t seem to fit, especially given how the play ends. After that opening explanation it is never referenced again, as if a rewrite took out later mentions but the beginning was left in? And last of all, there is another small question mark over the direction for these descriptive scenes. They are played out at the very front of the stage and felt way too close from my second row seat. At one point I even wanted to reach out and nudge them back just a little so it didn’t feel they were shouting right at me.

Don’t though for a moment think these criticisms are any reason not to get yourself along to see this play in the future. They are areas that will no doubt be ironed out as this play develops. After all, that is what these lovely pub theatres are here for, to allow stories to slowly grow and mature and become even better.

Right now though, even with these little faults, Sophie, Ben and Other Problems is quite simply one of the most charming and lovely pieces of writing and acting that you will see in a little theatre for less than the cost of a pint and a meal from the pub it sits above. You might be too late to see it on this short run, but fingers crossed it will be back soon, and then you really could do a whole lot worse than give it a try.