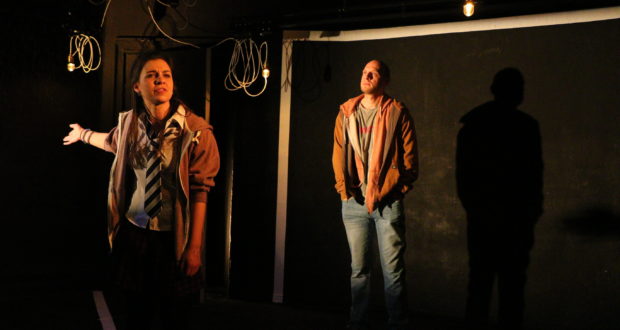 Pros: A script radiating with quality and a cast acting their socks off.

Pros: A script radiating with quality and a cast acting their socks off. Cons: The flashback style plot and pace of dialogue occasionally makes the story difficult to follow. The online blurb for Plastic at the Old Red Lion Theatre was intriguing; a new thriller set in the nineties that looks at four kids growing up in Essex from the perspective of both adults reminiscing, and teenagers living. The play asks us to remember the moment we became an adult…or did we miss it? Plastic displays a high level of perception as we are introduced to characters that are instantly&hellip;

This magnificent piece of storytelling comes to life in the hands of a brilliant cast, and the coming of age tale will resonate with many an audience.

The online blurb for Plastic at the Old Red Lion Theatre was intriguing; a new thriller set in the nineties that looks at four kids growing up in Essex from the perspective of both adults reminiscing, and teenagers living. The play asks us to remember the moment we became an adult…or did we miss it?

Plastic displays a high level of perception as we are introduced to characters that are instantly familiar. Firstly we have Kev, captain of the school football team: he’s good at everything and all the girls want to go out with him, he even scored the winner in the All Essex Schools cup final. In total contrast Ben is the class oddball, the kid who doesn’t quite fit in and never escapes the attention of class bully Wicksy. Meanwhile, Jack is the decent kid who tries to get on with everyone, and is Ben’s only real friend. Last but not least there is Lisa, the unbearably pretty brunette who has all the boys wrapped around her finger.

Ben and Jack are both madly in love with Lisa; the three spent their early years living on the same street. But alas, Lisa only has eyes for Kev, or so it seems? Most people will recognise the scenario and more importantly, feel an affinity with these characters: they will remind us of somebody we knew, maybe a brother, a sister, a friend. Or perhaps we will see something of ourselves. In any event, they set the scene for a gripping tale told at breakneck speed.

The set is totally black, save for the white outline of a goal so common on school playground walls. There are five coloured lightbulbs suspended on wires stretching across the stage; for the most part they provide the bulk of stage lighting, as the actors pull and push them into position, lighting their faces in the process. This novel use of lighting heightened the tension as the actors took centre stage in turn, delivering a mixture of monologues and two handers.

Past works in parallel with the present; youthful promise versus mature reality, a cocktail of growing pains and missed opportunities. The script cleverly relies on repetition to crank up the tension; the story kicks like a mule and delivers the almost obligatory sting in the tail. Again, the ubiquitous lightbulbs take a hand as they flicker at the mention of ‘blink’ and ‘there’s a letter for you’. They represent punctuation in the script as the audience can barely divert their gaze. It’s a brilliant, almost Hitchcockian masterstroke as the story reaches its conclusion.

If the play has a weakness, it’s the pace of storytelling that made it very difficult to follow. There’s barely a join in the transition between flashback and present; this means the audience have to stay on their toes, or else one gets quickly lost in character interplay. So you could say this play is hard work, but in a wholly positive sense because you are compelled to think as you watch. It would benefit from a more leisurely pace; this could easily be remedied with an additional ten minutes on the running time.

Having said that, this play succeeds mainly because of the cast. Louis Greatorex (Jack), Madison Clare (Lisa), Mark Weinman (Kev) and Thomas Coombes (Ben) are superb in their respective roles, and master what is a complex and challenging script with apparent ease.