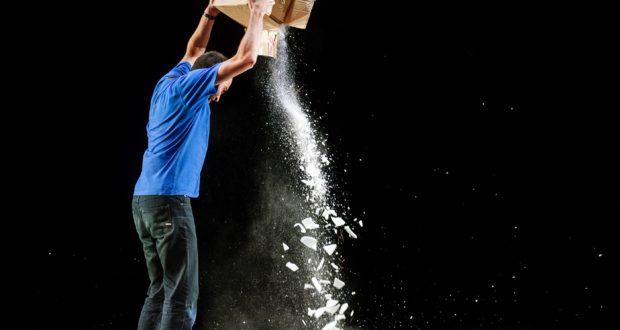 Pros: The original and effective approach to two well known political situations. Both actors can be truly hysterical with their clownish acting.

Cons: Although successful at exposing situations, there’s no real analysis and the shows don’t go into much detail on the problems.
Eurohouse and Palmyra, Battersea Arts Centre – Review

Pros: The original and effective approach to two well known political situations. Both actors can be truly hysterical with their clownish acting. Cons: Although successful at exposing situations, there’s no real analysis and the shows don’t go into much detail on the problems. Bertrand (Bert) Lesca and Nasi Voutsas have a special chemistry. They have been working together only since 2015, yet to see them on stage you would think they had known each other since nursery school. A talented duo with odd couple charm, they are the creators and performers of Eurohouse and Palmyra. Although the plays are unrelated, both&hellip;

Ingenious and original depiction of the Greek crisis and austerity measures imposed by the EU (EUROHOUSE) and of colonialism and military intervention in the Middle East (PALMYRA).

User Rating: Be the first one !
Bertrand (Bert) Lesca and Nasi Voutsas have a special chemistry. They have been working together only since 2015, yet to see them on stage you would think they had known each other since nursery school. A talented duo with odd couple charm, they are the creators and performers of Eurohouse and Palmyra. Although the plays are unrelated, both were shown as a double bill at the Battersea Arts Centre.

The common denominator in the two shows is the original and whimsical style, full of metaphors and symbolism. Everyday and common human interaction becomes the suggestion of more complex political affairs. Behind the hilarity of the actors’ expressions, dances and singing (the acting is highly physical and eloquent) lies deeper and darker meaning.

In Eurohouse Bert and Nasi, both wearing identical blue trainers, have been friends for a long time. They seem to get on pretty well and have much in common. It’s plain to see though that Bert is the one calling the shots: he leads the dancing and choses the songs, and while he is open to requests from the public and Nasi, these are consistently ignored. Bert gives Nasi some M&Ms but later, after Nasi has eaten them, asks for them back. At this stage we are all fully aware that what is going on stage is not just an awkward friendship but a metaphor for the relationship between the EU and Greece. To clarify any doubts, at the end of the show we are presented with some facts and statistics about the devastating effects of austerity measures imposed on Greece.

Eurohouse is a scathing critique of the EU as a fundamentally pro-austerity institution. It’s a criticism that has little to do either with the Brexit discourse of the likes of Boris Johnson or Nigel Farage or with that of the anti-austerity but neo-fascist Golden Dawn Party in Greece. The EU is not an unwelcome partner: Nasi likes Bert and wants to be his friend. The problem is that Bert is abusive and takes advantage of him, pushing him away with his unrealistic demands. An interesting detail in Eurohouse is Bert’s homoerotic attraction to Nasi, which I understood to symbolise Europe’s obsession with the romantic view of Greece as the cradle of western civilisation.

Palmyra, if more dramatic, is less specific in its message than Eurohouse. In this second show, both Bert and Nasi has a ceramic plate. Bert’s is broken, Nasi’s is not. Bert doesn’t like that so he breaks Nasi’s flatware. This starts a vicious circle of violence, with dozens of broken plates and dust along the stage. Needless to say, it all becomes a big mess. Each of them is quick to blame the other for his behaviour. Nasi says that Bert is intense. Bert treats Nasi like a barbarian unable to understand literature or languages. We begin to realise that this resonates like the story of colonialism and particularly recent interventions in the Middle East. For a soundtrack we have War’s “Why Can’t We Be Friend’s?” and Ella Fitzgerald and Louis Armstrong “Let’s Call the Whole Thing Off”. In this case the symbolic nature of the show is more problematic as rather than colonialism, some audiences might see in the battle between Bert and Nasi a “clash of civilisations”, an implication far more dangerous and reactionary.

Both shows are able to transmit a series of emotions through the eloquence of Bert and Nasi’s acts. When Bert hogs the chairs on stage in Palmyra (including Nasi’s), we quickly understand that this is not about chairs. Equally, when Bert stripes Nasi of his clothes to the point of humiliation in Eurohouse, we can fathom the Greek people’s feelings when Brussels imposed drastic austerity measures upon them. The merit and originality of the plays lies in being able to translate political and historical situations into the language of everyday relationships. It’s much easier to understand complicated events when the language used is shared by all of us. Whilst that is interesting and original, it also tends to limit the opportunity for analysis or in depth exploration of the cause of the problems. Both plays are descriptive in the most successful way possible but they don’t go beyond that level.