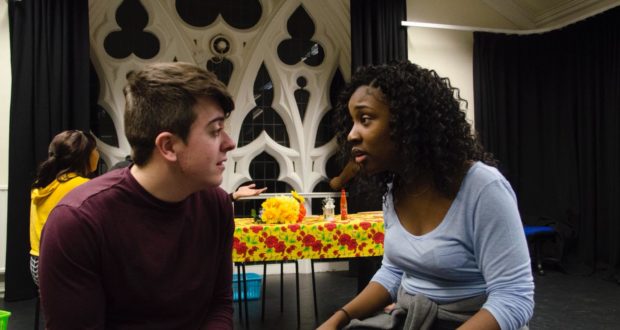 Pros: Subject matter has been thoughtfully dealt with, and the promising cast portray an infectious vitality.

Pros: Subject matter has been thoughtfully dealt with, and the promising cast portray an infectious vitality.  Cons: Some aspects of the graduate showcase still feel amateurish and need some development. If you ask any Briton which events from the early 1980s come first to their mind, they would probably answer something like the Falklands War, the wedding of Charles and Diana or Margaret Thatcher’s government. If you ask the same question in the Black British community, the answers would likely include the shooting of Cherry Groce, the death of Colin Roach and the Brixton Riots. Windrush Square is a play that&hellip;

A captivating show about the racial tensions lived in London during the first half of the 80’s.

If you ask any Briton which events from the early 1980s come first to their mind, they would probably answer something like the Falklands War, the wedding of Charles and Diana or Margaret Thatcher’s government. If you ask the same question in the Black British community, the answers would likely include the shooting of Cherry Groce, the death of Colin Roach and the Brixton Riots. Windrush Square is a play that looks at this important period of British history and its impact on the Afro-Caribbean community and beyond.

The story takes place through the eyes of the Johnson family, consisting of: Granma Johnson (Romy Iris Conroy), a first generation migrant who came to England in the late 40s; her son and the father figure of the family, Elijah (Abayomi Oniyide); and his three young children, Naomi (Nadeyne Lewis), Ruby (Deslie Thomas) and Isaac (Sirach Mcleish).

Naomi starts dating a white guy, Lucas (Jack Bloss), which prompts many reverse Guess Who’s Coming to Dinner situations. The Johnson’s peaceful life is frequently disturbed by the mounting racial tensions building in the community, and despite Elijah’s efforts to keep his family safe from trouble, they inevitably become absorbed by the events.

There’s a noticeable opposition between each of the generations, with the strongest clash between the father, who avoids disturbances at any cost, and the children (especially Isaac), who see the submission of their parents’ generation as a failure to challenge the racism faced by the Black community. While the characterisation is partly clichéd and relies on well-known stereotypes (Granma too fond of rum, a hyper devoted Christian father, an omnipresent hot sauce bottle on the table) the intergenerational contrast has been well constructed and gives a credible explanation of the youth’s radicalisation.

The action spans from 1981 to 1985 and revolves around four crucial events that shocked London’s Black community: the New Cross fire of January 1981; the 1981 Brixton Riots; the death of Colin Roach in 1983 and its aftermath; and the 1985 Brixton riots. Each of the events is followed by a community meeting chaired by Elijah, whose initial advocacy for peaceful resistance gradually develops into more radical proposals.

During these meetings the characters discuss how to confront discrimination and police brutality. Some offer non-violent opposition, others think that the only option is to fight back. In the first meeting the protagonist says “justice is unknown to us”. At the end of each assembly, all the participants raise their fist and shout “keep strong!” At the last meeting, however, only one of them says it, and we can’t help but noticing the cynicism in her voice. The gradual disillusionment and frustration has been very well captured through these meetings.

The play is very musical and has a full repertoire of Bob Marley and calypso songs. Although it sometimes overlaps the dialogue and might go on for too long, the lyrics are an appropriate match to the events of the play.

Windrush Square is the graduate showcase of the Monument Theatre Company, a young and dynamic group full of joie de vivre and with important things to tell us. While the play hasn’t bloomed into a fully rounded production and needs some polishing and editing, the potential is plain to see. The promising six young actors have an infectious vitality which communicates their contagious passion for this project.

The closing scene, in what I think is the finest part of the play, is a powerful speech by Elijah who, well before the Black Lives Matter movement started in 2013, reminds us that people were already fighting in the streets for equality and justice, “because Black lives matter. Because all lives matter.”