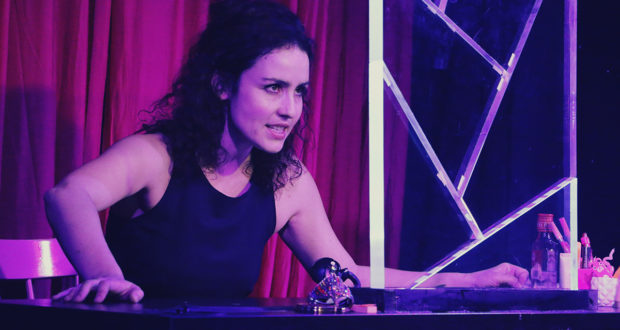 From a commission for the Fundamental Monodrama Festival in Luxembourg to the Leicester Square Theatre, numerous milestones have marked Mirrors’ three-year journey to the West End. Initially conceived as a short monologue, Siobhan McMillan‘s modern fairy tale has become a multi-dimensional exploration of female characters, in which audiences are compelled to recognise their personal flaws and see the irony behind each failure. McMillan has overcome the same vulnerabilities that now feature in the dark comedy along her own empowering career path, and we spoke to the writer and performer to learn her recipe for happiness and success.

Mirrors has been described as a play about angst, beauty, narcissism, neuroses and vulnerabilities. How much did you draw from your personal experience to write and perform it?
It is, to be honest with you, completely from my own experience. Obviously, the characters are more extreme versions, but, throughout my life – especially being a performer and feeling a lot of pressure to look a certain way, behave a certain way, be successful, sexy and gorgeous, and all these things that women are supposed to be – it has definitely come from my experience.

Do you think the show would work if someone other than you performed it?
I’ve been talking to my director about this, and she thinks it would be great to offer it to young women. Because there is this whole thing about women often not having the best roles, and obviously in Mirrors there’s so many amazing [female] characters, [so] my director very much wants me to start offering it to young women. I’m a little nervous, because it’s my baby, but it could be great.

In times like this when women’s empowerment is finally at the top of the world’s agenda, do you consider yourself a feminist?
Abso-bloody-lutely! For the first time, I watched that documentary, Miss Representation [by Jennifer Siebel Newsom], which talks about women in media, parts in films and parts in plays. It’s from 2011, but a lot of this still hasn’t changed. We’ve really got to listen to each other’s stories as women, really try to get our work heard and support each other, and Mirrors deals with that quite a lot. All these women in competition with each other . . .

This reflects on your career as well because, at one point, you started working on your own projects and creating your own stuff.
That’s exactly right. I was a bit fed up of going to auditions and having to be – it was usually a sort of prostitute, or something ridiculous like that. Every single audition. And I wanted to be a good role model to other actors, and also generate really exciting work for myself, rather than just be prostitute after prostitute.

How long ago did you make this decision?
I was a jobbing actress for about ten years and then, about four years ago, I decided to apply to RADA and do their masters in crazy, experimental theatre. I got rid of my agent and I just went [on the course]. After that, since then, I’ve just done my own work.

Mirrors presents an array of flawed personalities. What advice would you give other women to avoid being like your characters and live a happier life?
I think being able to take yourself with a big pinch of salt and to be able to laugh at yourself is a really powerful thing to be able to do. I don’t mean like not taking yourself seriously, but just to be able to see how ridiculous it is to try to be perfect all the time. If we can all come together – all as women, and men, and everyone – and sort of say, ‘Look, we’re all flawed, we’re all a mess sometimes, that’s actually really funny, let’s just embrace that about each other,’ I think we could be really happy.

After watching Mirrors, critics and audiences identified a number of references, like Salome, Lorca, Ken Russell, Zelda, Gloria from Fitzgerald’s The Beautiful and Damned, Sylvia Plath and even Conrad’s Heart of Darkness. Are there any real or fictional women that represent a source of inspiration for your work?
I think a lot of the women that I’ve known over the years have been the main source of inspiration, and also – I hope this doesn’t sound arrogant – myself, in the way I’ve evolved and changed over the years. And I love, obviously, the women in fairy tales, the witches and the princesses and turning all of that completely on its head.

Is there one fairy tale in particular, other than the one you wrote?
The witch in Snow White, for sure. I think Angelina Jolie as Maleficent is a good inspiration for her absolute poise and elegance – she’s completely focused and fearless. It’s something that I’ve always aspired to be, but I’m not naturally. Also, Charlize Theron in Snow White and the Huntsman, so powerful! Anjelica Huston in The Witches, and there’s also this brilliant movie called The Love Witch. I really recommend it if you haven’t seen it already!

We’ve heard that you’re currently working on a sequel for Mirrors, called A Woman in a Hotel Room. Can you tell us more about it?
The main character, ShyGirl, is invited out to nondescript Europe to perform a one-woman show. She is in this strange hotel where there doesn’t seem to be anyone else, and starts to feel like a purgatory, and there are all these women who keep popping up in the room with her. They’re actually in her mind, but they’re actual people on stage. It’s quite surreal and my main inspiration for it was Jean-Paul Sartre.

Do you have any idea of when and where it will actually come to life?It’s going to need quite a bit of money and if anyone would like to sponsor it, that would be great. Women have to be going under floorboards and popping out of different places, so it’s going to need a strong technical aspect.

Mirrors was first commissioned in 2015 for a theatre festival in Luxembourg before runs at the Rosemary Branch in 2016 and at the King’s Head the following year. How has the play evolved since its first draft, especially, in view of this West End transfer?
When I first performed it, at the Monodrama Festival in Luxembourg, I had literally two rehearsals, and it was very raw, very rough. Really good fun, but I had no idea of how the audience would react. But they all seemed to love it, so I thought, ‘I’ve gotta own this.’

Then I came back to London and the director I was working with, Jesse Raiment, helped me develop it more for the Camden People’s Festival of Feminism, which was a one-night thing. It was starting to take a bit more shape, but it was still very rough and ready.

For the Rosemary Branch it became much more precise, although I think it was possibly lacking a bit of extra heart. Then, for the King’s Head run, it was much more about the characters coming to life. Particularly this character ShyGirl, who is hopeless and, even just a couple of years ago, I really felt I was like her. Whereas now, when I see her, and I see the things she says, I’m just like, ‘Oh my god, you’re such a disempowered woman, sort yourself out!’

For the West End run, I want it to be seen as a comedy with a lot of poignancy in it. I want to enjoy it and I want people to come and see it who haven’t seen this sort of thing before. Not just friends and family, but also other people who I feel can get a lot out of it.

Can you tell us three things that people don’t know yet about Mirrors?
People always think that I’m quite confident, whereas I’m actually really shy and it takes a lot for me to get that other aspect of myself out. There’s a line in Mirrors that people think is just a strange, funny one, but it’s something that my drama school director actually said to me: ‘You’re going to end up an old lady with a variety of wigs and no husband!’ Ha! Also, my sister’s band composed all of the music for the show, which is quite cool.

Why do you think audiences should go to see it?
Because it’s really funny and brings people together. All the people I’ve spoken to loved it and found it really uplifting, but it also brings up important stuff that we can start being honest about. Men really enjoy it too, so it’s not just for lonely women. Besides, it doesn’t have these kind of weird isolated jokes, but a sense of these awkward situations that everyone can identify with.

Mirrors is currently playing at Leicester Square Theatre until 14 April.